There’s a new standard in town and its name is CHIP – Connected Home Over the Internet Protocol. It aims to elevate consumers’ smart home experiences by making products more compatible. Up until now, we’ve had a range of protocols – Wi-Fi, Zigbee, Bluetooth® Low Energy, Thread, etc. Most smart home products support just one or two of these wireless standards but not all. That’s where CHIP comes in. It brings all of the protocols into one overarching standard. This makes it much easier for consumers to pick and choose their smart home devices based on other merits outside of interoperability, so they can get the rich experience they’re yearning for.

Great news for consumers but what does it mean for you – the designer of smart home devices? Well, it’s great news for you too. CHIP, brought to you by the Zigbee Alliance, and supported by the likes of Apple, Amazon, Google, Samsung and others, is an open-source approach that promises to simplify and speed up development time for manufacturers to get smart home devices to market faster.

CHIP and Wi-Fi 6: The Essentials for a Truly Smart Home

In addition to CHIP, Wi-Fi 6 plays a vital role in smart home success. The primary benefits of Wi-Fi 6 are twofold: to increase device performance and to handle the connection of a number of devices. The latter is important in advancing the smart home. Not only can it connect a host of devices, but many of the devices can also act as a “pod,” which distributes the signal throughout the home. The results: close proximity to the router is no longer necessary and many dead zones are eliminated.

This distributed network (Wi-Fi 6 and pods) connects the end devices – temperature, security and lighting sensors, printers, appliances, computers, TVs, etc. These devices will communicate with the pods, and through the pods to the router and then to the internet. With CHIP used in the development of Wi-Fi 6 routers, pods and other devices, the entire network can communicate, and offer better performance and security. What’s more: the end devices do not have to support meshing capabilities themselves anymore. Given they are always in range via the pods, the cost and the design complexity of these IoT end-devices is reduced, while enabling sleeker and smaller, less obtrusive designs with longer battery life. 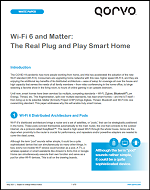 Do you want to learn more? I’ve written a white paper, Wi-Fi 6 and CHIP: The Real Plug and Play Smart Home, that takes a deeper dive into CHIP and other technologies that enable the smart home.