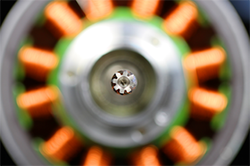 Over the course of the past century, power tools have noticeably evolved. Today, they are wireless, light, battery-operated, and work hard so we don’t have to. So, what’s fueling the evolution of power tools? Besides power tool enthusiasts, much can be attributed to the many advancements in semiconductor technology – most specifically with cordless power tools.

This blog covers the key aspects of the cordless, battery-powered variant, including what's propelling the evolution and the challenges along the way. It also covers how the microprocessor and the brushless DC motor play an instrumental role in transforming the power tools we use today. Additionally, this blog outlines how the incorporation of brushless DC motors in power tools is providing a competitive edge for manufacturers.

The first component of an electric power tool is the power source. All electric-powered tools can be subdivided into two classes: corded and cordless.

The Lithium Ion based battery has become the most prominent because of its increased energy density, as well as resilience to hold a charge.

The second component is an actuator of sorts, or a motor that will transform the electric energy into mechanical energy. This motor can be a Universal AC/DC brushed motor, a brushed DC motor, or a brushless DC (BLDC) motor. Many of today’s tools have moved to the tri-phase BLDC motor topology.

Finally, a switch is employed to control the source-to-motor energy transfer. This component could be as simple as an interrupter, controlling whether there is a current flow. Or it could be something slightly more sophisticated, such as a potentiometer, allowing the user to specify how much energy flows from source to motor.

For the first 100 years of electric power tool development, a power source, a motor and a switch/potentiometer were all that was needed to design and fabricate drills, sanders, grinders, screwdrivers, blowers, saws, etc. However, in the 20th century, the emergence of high-energy density batteries changed this. Additionally, we saw the emergence of green energy solutions and their integration into all forms of design.

The challenge was to continue using a potentiometer to control tool speed without having to pass the high current through its resistive component. As we will see later, this is a rather simple fix. The motor, on the other hand, proved to be a far more substantial and complex challenge.

Early in power tool development, the motor employed was either a brushed universal AC/DC motor for corded tools, or a brushed DC motor for cordless tools, as shown below. Because both motor topologies are brushed in nature, motion is obtained by using carbon brushes to pass a current into a copper commutator, which then generates an internal revolving magnetic field. By placing the electromagnet winding along with the commutator in the rotor, and the permanent magnets in the stator, we obtain two magnetic fields continuously fighting each other, and causing the motion we need. 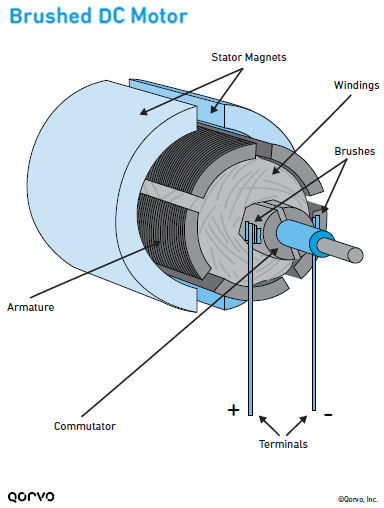 Unfortunately, this comes at the cost of considerable friction in between the brushes and the commutator. The friction is considerable and after prolonged use, the motor will eventually destroy itself. This friction is energy being wasted in the form of heat. That is energy that flowed out of the power source and did not generate any useful work. Systems revolving around this topology are said to give an efficiency no higher than 80 percent (in the best-case scenario). This means 20 percent of the energy inside of the battery is used to generate heat.

When you are trying to make holes with a battery-powered drill, using a fifth of your power source to generate heat does not sound very appealing.

Given the challenges discussed above, it becomes apparent that replacing or removing the brushes and commutator is essential. This is highlighted in the tri-phase BLDC motor topology, as shown below. A BLDC motor is capable of giving us the exact same rotational motion without using brushes or a mechanical commutator. Instead, we generate the revolving magnetic field electronically. Using electronic circuitry, we can create two magnetic fields fighting each other to create motor motion. The advantage of this is that there is no friction between the rotor and stator components, which increases both reliability and energy efficiency. 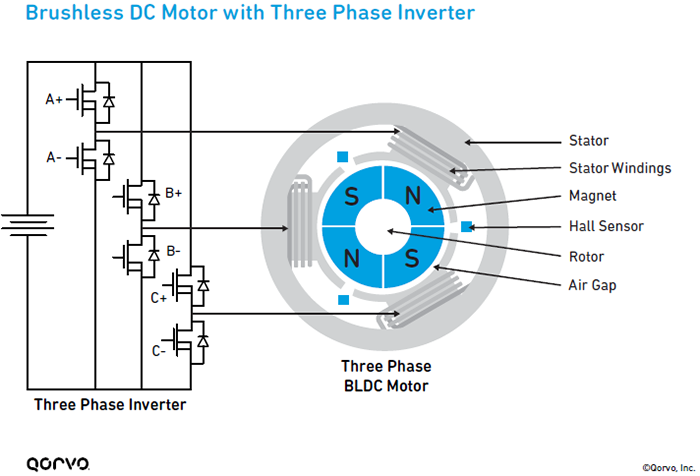 Tri-phase BLDC motors can reach efficiencies as high as 96 percent. This means our battery will only waste a twentieth of its energy in the form of heat.

As with all designs, there are some challenges when employing BLDC motors. Brushed DC motors solve the inherent problem of aligning both magnetic fields to obtain the most efficient motion profile. They achieve this when the commutator sequence is designed and placed in a way that the revolving magnetic field is always in tune with the permanent magnets’ field. However, because BLDC motors do not have a physical commutator, this action is done using commutation logic sequencing. To obtain the efficiencies we referred to earlier, we must align both magnetic fields as perfectly as possible using a control circuit like the one shown below. 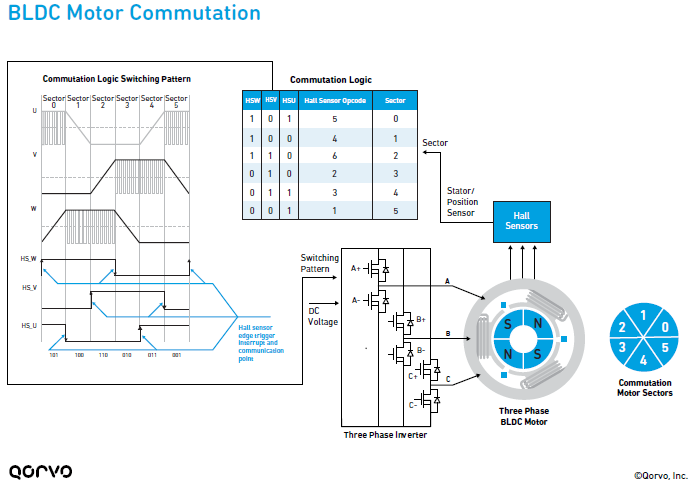 This sophisticated circuitry extracts the rotor’s position to align both magnetic fields electronically. In the case of a tri-phase BLDC motor, this block is most often made of a microcontroller and a tri-phase inverter power stage employing sensors, like a Hall Sensor, to extract the rotor’s position information. Adding this circuitry does take up some space and adds some cost. However, manufacturers are seeing the benefits of being untethered and consumers are creating demand for these types of motor solutions. Thus, more power tools are being designed using tri-phase BLDC motor topology.

Modern power tools still consist of a power source, a motor actuator and a means to control energy flow, such as a potentiometer. However, in order to provide all the energy preservation, we need to add intelligence.

Intelligence is provided by a microprocessor. With a microprocessor, we can now monitor the power source and provide the required actuation. We can also monitor the value of the potentiometer and control the motor speed without having to pass the current through its resistive component. We achieve this by using Analog to Digital Converters (ADC). The energy expenditure in this action is negligible.

However, the most important aspect of the microprocessor is to provide an efficient mechanism to properly energize tri-phase BLDC motors to obtain the efficiency improvements that battery-powered tools require. The microcontroller-based power stage provides all the tools to successfully generate a properly aligned revolving magnetic field, which translates into the best possible motion profile. 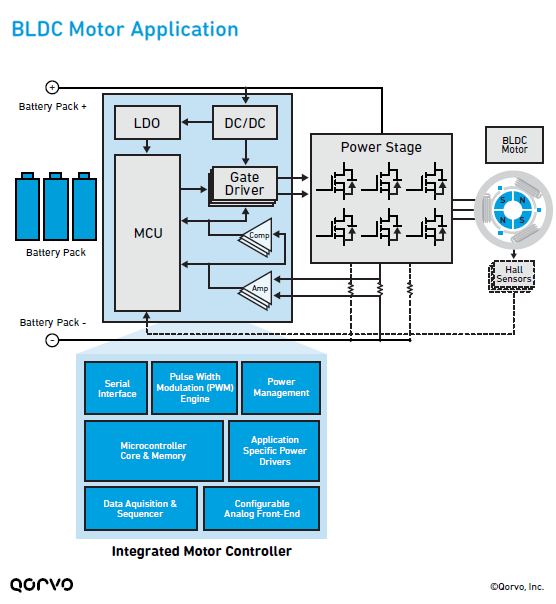 Here is a list of the items required within most modern power tool implementations:

Moving from a switch and a motor to the list above, it becomes clear our circuitry count has increased considerably. However, new technology has made it so we can pack all of this into a small form factor, which is another key enabler for motor manufacturers to adopt BLDC topologies.

Qorvo’s solution to attaining all the benefits of the electronic motor functionality while taking up minimal space is the family of PAC5xxx-series devices. In a single package, with an extremely small footprint, a device like the PAC5527 integrates the circuitry required to drive most battery-based power tools. 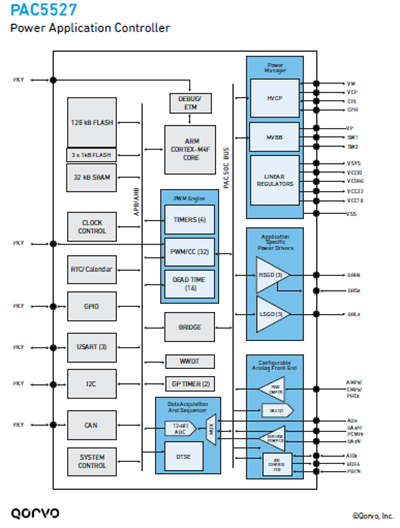 The PAC5527 contains a DC/DC converter that takes the battery voltage and steps it down to the different rails required to power the system’s different blocks. Three high-current pre-driver stages required to drive a very powerful tri-phase inverter (over 1 KW) are included. Its ADC, with a programmable sequencer, allows for the coordinated capture of multiple analog parameters without affecting central processing unit's (CPU’s) real time. It encompasses protection blocks to ensure the system current is kept within bounds, protecting against hazardous conditions that may induce tool damage, while at the same time removing the user from harm’s way (e.g., a fire). Multiple general-purpose input/outputs (GPIOs) to monitor different signals are provided. Even the circuitry to extract rotor position grant us the ability to generate a fully aligned revolving magnetic field, which forms part of the arsenal of tools encased within a single PAC5527 device.

The PAC5527 generates one of the smallest possible, tri-phase inverter power drivers. So small, power tools revolving around this solution can be shaped to be ergonomically efficient while enhancing the power tool’s energy efficiency. Additionally, because of its small footprint and high level of integration, the entire application’s cost structure is also optimized.

The Next Wave of Power Tools

The use of BLDC motor manufacturing is revving up, and as technology continues to evolve, these motors will become even more user-friendly, effective and reliable. Because of the onset of electronically controlled BLDC motors, tools are more powerful, more efficient, smaller in size and lighter in weight. With each passing year, Qorvo will continue to provide innovative products like the PAC5xxx series of parts to propel tri-phase BLDC motor topology even further. 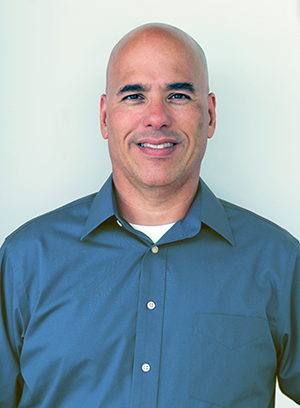 Jose Quinones has been spinning motors for more than 25 years. As an applications engineer, he works in tandem with customers to design a range of motion control embedded applications – from conception, through hardware, software and firmware implementation – to create novel and more efficient products.