Why UWB is the Premier Location Technology

Unlike other technologies like Bluetooth or WiFi, which are being re-tooled for a new purpose, the physical properties of the UWB RF signal were specifically defined from the start to achieve real-time, ultra-accurate, ultra-reliable location and communication.

At Qorvo, we also wanted UWB technology to become ubiquitous, and we added low-power and low-cost to the definition of our UWB chips.

UWB leverages Time of Flight (ToF), which is a method for measuring the distance between two radio transceivers by multiplying the Time of Flight of the signal by the speed of light. From this basic principle, UWB technology can be implemented in different ways based on the target applications needs: Time Difference of Arrival (TDoA), Two Way Ranging, or Phase Difference of Arrival (PDoA).

The TDoA method is very similar to GPS. Multiple reference points, called anchors, are deployed in a venue and are time synchronized. The mobile devices will beacon, and when an anchor receives the beacon signal it will timestamp it. The timestamps from multiple anchors are then sent back to a central location engine which will run multilateration algorithms based on Time Difference of Arrival of the beacons signals to compute the X, Y, Z of the mobile devices. 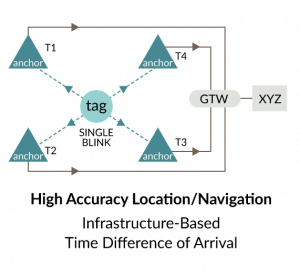 The TWR method relies on two-way communication between two devices. As they communicate, the devices also measure the Time of Flight of the UWB RF signal between them. By multiplying the round trip time of the signal by the speed of light, and then dividing by 2, you can derive the actual distance between the two devices. If you apply the TWR scheme between two devices, you will get the distance (D) between the two devices. Based on the TWR scheme, you can also implement 2D or even 3D location by measuring the distance between your mobile tags and fixed beacons – this is called triangulation. 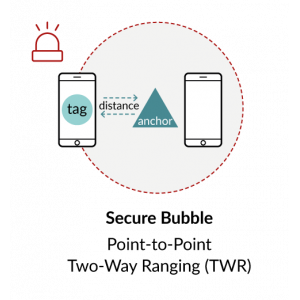 The PDoA method consists of combining the TWR scheme that delivers the distance between two devices with the measure of the bearing between the two devices. The combination of distance and bearing allows the calculation of the relative position of two devices without any other infrastructure. To do so, one of the devices carries two antennas and is able to measure the Phase Difference of Arrival of the RF signal. 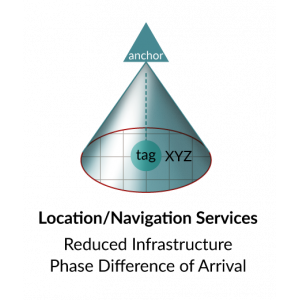 The IEEE 802.15.4a is an international standard defining the IR-UWB physical layer. This standard was designed to deliver very high accuracy location while providing simultaneous two-way communication – up to 27Mbps – to collect sensor data and control actuators. This standard was initiated in 2005 and ratified in 2007 before being fully integrated in 2011. In 2018 the standard was re-opened in the form of 802.15.4z to add further security to the physical layer as UWB is now expected to be used as a secure transaction wireless technology by the automotive and mobile industries.

Decawave CTO and co-founder Michael McLaughlin was part of the team of engineers who created the standard. This early team had the vision to make every connected object "location aware," as they believed that "answering the where" would add huge value to the success of applications like the Internet of Things (IoT).

FiRa stands for fine ranging, a term that highlights UWB technology’s unique ability to deliver unprecedented accuracy and security when measuring distance to a target or determining position. As an industry consortium, FiRa believes UWB technology will transform the way people experience connectivity and is committed to the widespread adoption of UWB applications. The FiRa Consortium is envisioning many use cases including hands-free access control, indoor location, and navigation, as well as peer-to-peer applications.

CCC is developing the Digital Key, a new open standard that allows smart devices, like smartphones and smartwatches, to act as a vehicle key. This standardized ecosystem enables mobile devices to store, authenticate, and share digital keys for vehicles over UWB in a secure, privacy-preserving way that works everywhere.

The UWB Alliance is a global, not-for-profit organization that works to collectively establish UWB technology as an open-standards industry. It serves to promote large-scale deployments and protect the millions of installed devices globally from encroaching radio technologies. The UWB Alliance is currently comprised of founding members including Decawave, Hyundai, Kia, Zebra, Alteros, Novelda, and Ubisense.

This alliance will drive growth through end-to-end, vendor-agnostic interoperability programs that will provide accurate location, navigation, tracking, security, imaging, sensing, and communication to IoT and Industry 4.0 applications across multiple industries.