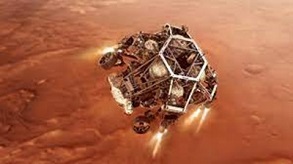 Perseverance made its entry, descent and landing (EDL) into the crater, dubbed the "seven minutes of terror." It's a harrowing sequence. As the spacecraft enters the Martian atmosphere, it is traveling at 12,500 miles per hour – fast enough to vaporize. From that moment, it has seven minutes to reach the narrow target, which means the spacecraft must reduce its speed to zero in a very short amount of time. Not only that, the speed of the EDL happens faster than a radio signal can reach Earth from Mars, leaving Perseverance to pilot itself through those critical minutes.

Similar to Qorvo's role in 2012 when Curiosity landed on Mars, NASA's Jet Propulsion Laboratory (JPL) officials confirmed that Qorvo products were integrated into the Mars Perseverance's critical descent stage landing radar – a component of the sky crane that lowered the rover safely to the surface. 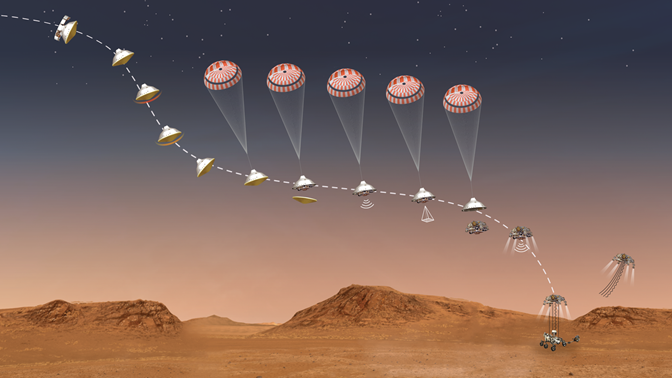 At takeoff, Perseverance was transported by the ring-shaped cruise stage. Once it entered the Martian atmosphere and EDL began, the cruise stage burned up. In this phase, Perseverance was housed in a heat shield so it could tolerate temperatures reaching about 2,370 degrees Fahrenheit. It then deployed a chute at a predetermined distance from the target site and discarded the heat shields, revealing landing radar and cameras to help the spacecraft navigate the safe landing.

The rover, landed on Mars' Jezero Crater on February 18, 2021. According to NASA, it will "seek signs of ancient life and collect samples of rock and regolith (broken rock and soil) for possible return to Earth." It's constantly capturing fascinating images and sounds from the crater and delivering them for all to see, and will continue to do so for the next two Earth years (one Mars year).