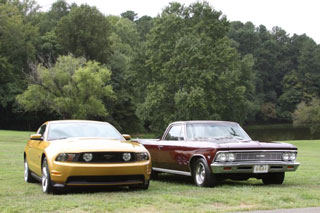 As a gearhead, that frightens me. I’ve always gravitated toward muscle cars, both new and old, because I like to feel connected to the car. I like the feeling of being pushed back in the seat when I press the long, skinny pedal. I love the experience of going through the gears and the throaty roar of a finely-tuned V8, like the one in my “TrackPack” optioned Mustang GT.

But as a techie, I also appreciate connected and autonomous cars – so long as they don’t look like inflated characters from classic video game, Dig Dug.

You Googlers know exactly what I mean!

Connecting the car has everything to do with RF technology, and networking professionals should understand the lingo and challenges. If the future of driving didn’t rely on RF, we’d all have tethers hanging off the back of our cars.

Hey, don’t run over my wire!

You’ll find every manner of RF in a connected vehicle. RF powers GPS satellite navigation, digital satellite radio, Wi-Fi connectivity, Bluetooth integration for smartphones and cellular 4G connections, routed through a shark fin on the roof or embedded into the roof itself.

Most automakers are even offering 4G LTE cellular plans for their vehicles. And according to Cars.com, 126 car and truck models from 16 different car manufacturers have in-car Wi-Fi for the 2017 model year.

Who knows? We may one day carry around a Chevrolet smartphone.

RF filtering technology allows LTE, Wi-Fi and satellite signals to coexist both inside and outside the vehicle, without interference. Turns out, the Sirius XM satellite radio frequency band runs right up against a cellular 4G band in certain regions. Talk about getting mixed signals.

Heat can also cause interference. The extreme heat of asphalt on a hot day or the cutting chill of driving through an ice storm can cause filters to “drift” from their intended frequency, unless specifically engineered for stability. Automakers are increasingly turning to a new breed of filter, called temperature-compensated bulk acoustic wave (TC-BAW), for peace of mind: whether their vehicles end up at the equator, or at the poles.

RF not only ensures strong connections within the car, but also between cars for accident avoidance, managing braking systems, and maintaining safe distances and buffers. Today, we accomplish vehicle-to-vehicle (V2V) and vehicle-to-infrastructure (V2I) communication through 4G and Wi-Fi networks, but 4G connections aren’t nearly as fast as they need to be.

If we want truly autonomous cars – so we can tend to important matters like doing our makeup, eating sushi or day trading on our smartphones while driving – we’ll need a next-generation wireless network.

On the flip side, 5G will also open up new threats. When every car has a unique IP address, network security must keep pace with RF progress to keep hackers out. In the words of another Network World contributor, Fredric Paul:

“Keeping cars physically secure has been an issue since automobiles first became popular more than a century ago. Keeping them digitally secure could be an even bigger, more complicated task, with equally costly and destructive consequences for failure.”

Do I believe we’ll see 10 million self-driving cars on the road by 2020? No, and as a car nut, I dread being replaced by light detection and ranging (LIDAR) and a vast array of sensors. But we’ll certainly all experience autonomous driving in our lifetime.

In the meantime, we have the connected car, and this man dressed as a car seat.