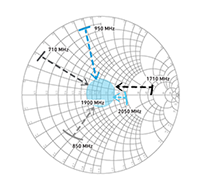 5G is bringing a significant increase in new bands that mobile antennas must support. More than ever before, there’s a need for handset designers to use more aperture tuners on a single antenna due to the complexity of the new phone designs. While each addition of an aperture tuner helps optimize the overall antenna performance for each band, it sometimes comes at the cost of antenna efficiency. Without the proper balance of antenna efficiency and performance of each band on an antenna, the overall device performance and range will suffer.

Each antenna has a frequency at which it resonates naturally – it is at this frequency that we see maximum antenna efficiency. Aperture tuning is accomplished by placing a shunt capacitor (to lower the resonant frequency) or shunt inductor (to raise the resonant frequency) on the antenna. Multiple capacitors and inductors help tune an antenna to multiple frequencies by using an antenna tuner switch – as displayed in the below image. 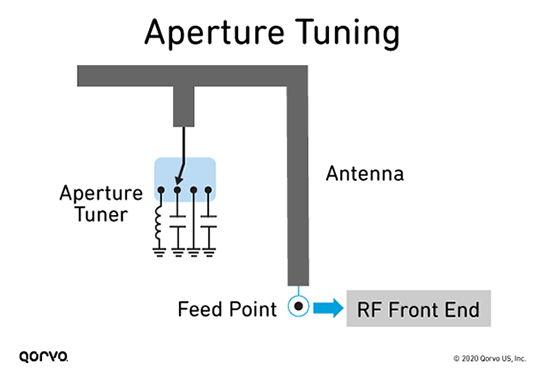 Aperture tuning primarily uses tuner switches and tunable capacitors. The main figures of merit for these switches are ON state resistance (RON) and OFF state capacitance (COFF), as shown below. For tunable capacitors, it is critical to have a wide range for tuning capacitance and a good Q factor (Quality factor). RON and COFF significantly affect antenna efficiency. RON's impact is greatest when the voltage is low; the impact of COFF is greatest when the voltage is high. Strategic placement of switches with low RON or low COFF optimizes tuning for different frequencies.

In the OFF state, the COFF of an aperture tuner contributes to the capacitive loading on the antenna, lowering the resonant frequency. The higher the COFF of the tuner, the more the frequency shifts away from the antenna’s natural resonance.

Figure below demonstrates the impact of the COFF of a Single Pole Double Throw (SPDT) switch on the simulated efficiency of an Inverted F Antenna (IFA). The baseline measurement shown was taken without the SPDT placed at the tuning location. Once added, the COFF of each port was set to 100 fF and 200 fF. 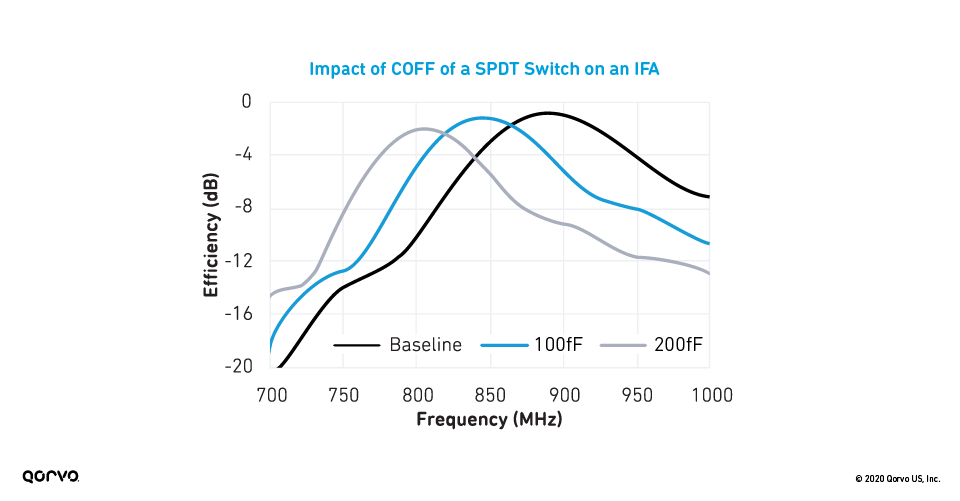 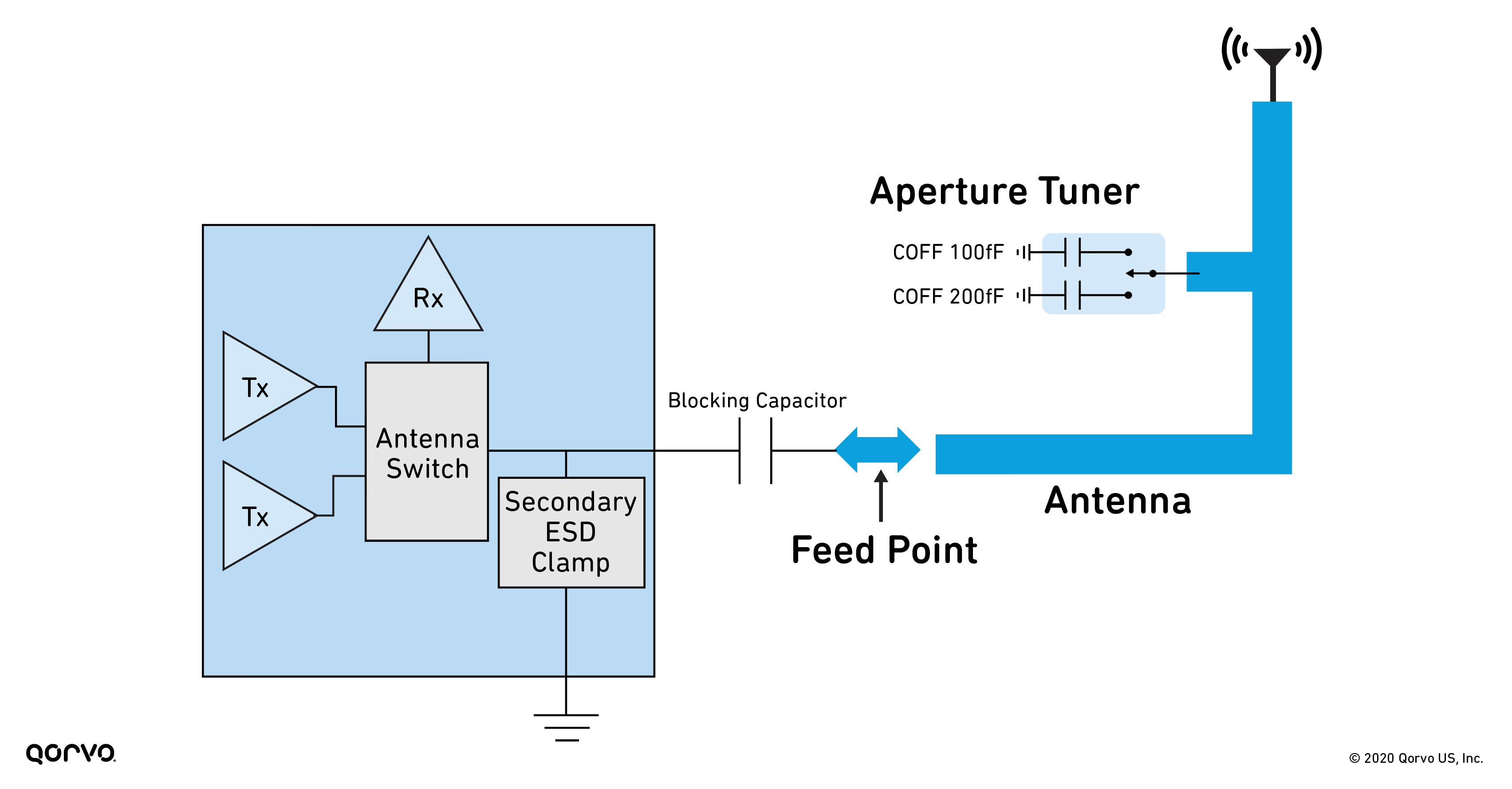 To offset the frequency shift caused by the tuner’s COFF, one port of the SPDT can be used to switch in an inductor to re-tune the antenna back to its natural resonant frequency. In this scenario, the antenna is tuned twice – once by the tuner’s COFF and a second time by the inductor used to re-align the antenna to its original resonance. However, this method comes at the expense of efficiency and bandwidth, as evidenced by Figure 3, which shows the antenna’s efficiency when re-tuned to its original 890 MHz resonance. 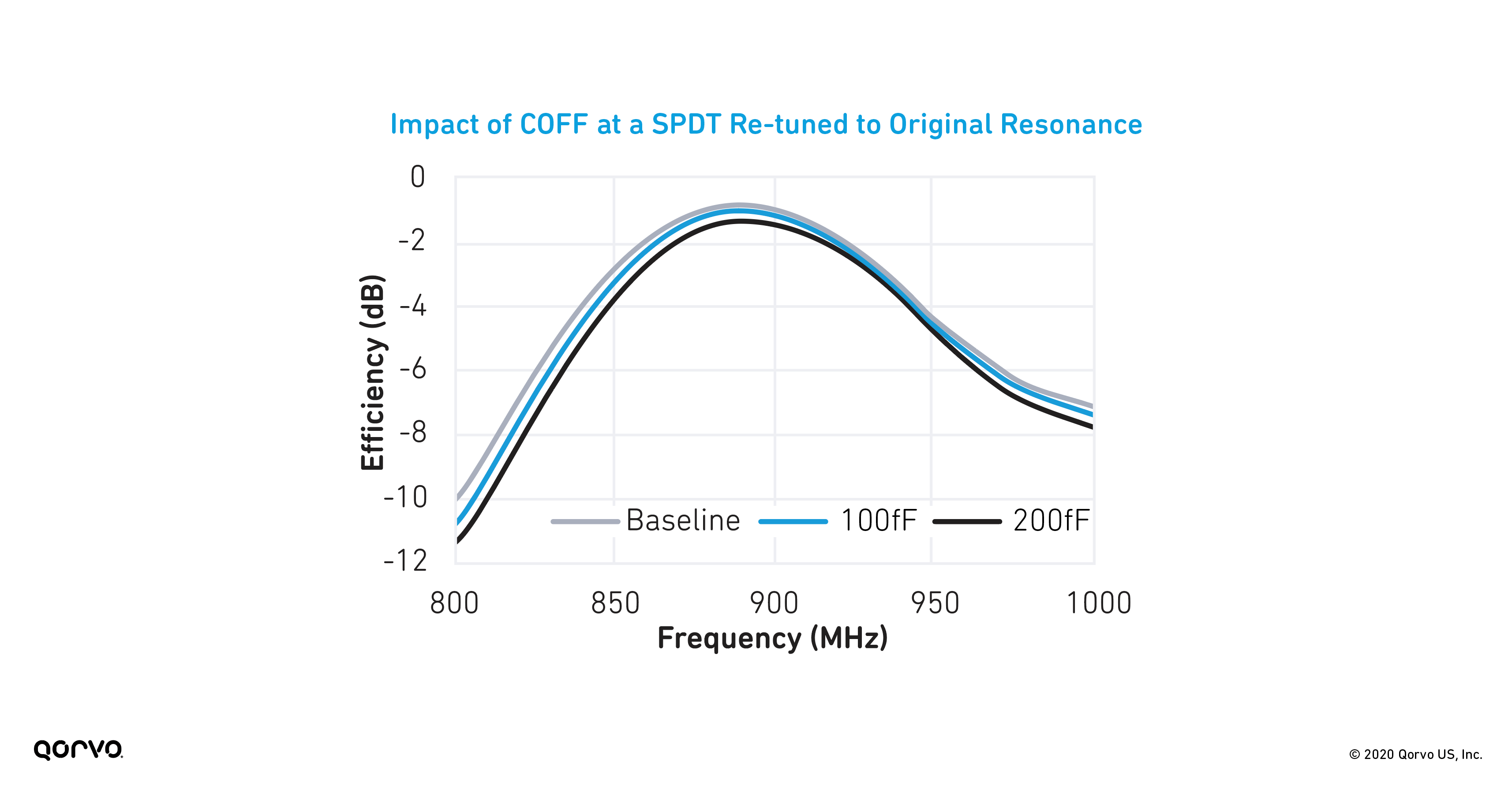 While it was possible to account for the COFF of the SPDT, the high COFF switch resulted in a 0.47 dB decrease in peak efficiency compared to the baseline measurement. To facilitate the mobile phone’s frequency band swapping on an antenna, aperture tuning is necessary.

Our mobile devices are obviously getting more complicated and sophisticated. This is putting a strain on the antenna and its ability to meet all the needs of the user. Unfortunately, not just any antenna tuning component can meet the needs of these sophisticated device systems. As outlined in this blog, using insufficient high COFF tuners results in significant frequency shifts that de-tune the antenna and reduce overall antenna efficiency. Thus, low COFF switches are best when trying to balance between antenna efficiency and frequency band requirement needs.

4 Things to Know About Antenna Tuning in 4G/5G Smartphones

One part technical, one part content, and one part strategy, our team is dedicated to connecting you with helpful, timely insights from some of the bright minds at Qorvo. A special thanks to Christopher Williams, Qorvo Applications Engineer, who contributed to this blog post.