Today’s designers of Wi-Fi consumer premises equipment (CPE) are challenged with creating increasingly complex devices (such as routers) that provide more functionality in smaller package sizes. This heightens the risk of problems like thermal issues, RF interference, mismatched components and PCB layout errors. Further adding to design complexity are regional regulatory requirement differences, which make it more difficult to build a single stock keeping unit (SKU) for sale in all regions. Due to product complexity, different sections of Wi-Fi CPE production are often assigned to separate design teams or individuals. As designers work in silos, problems often emerge when the sections are brought together. Thus, a system-level approach to building these solutions is essential to minimize potential issues.

One key tip for success – increased communication! If designers can approach projects from a more holistic perspective – thinking about the big picture and how their individual decisions affect the overall performance – system-level optimization becomes a team effort and encourages cross-functional communication. Working together from this context, design teams are often able to minimize the number of SKUs, while still meeting requirements including thermal dissipation, regional regulations, interference, and more. Unfortunately, this shift in process can often be difficult to implement and knowing where to start may not be immediately obvious. Read on for some suggestions on how to best approach these and other considerations to improve your next wireless connectivity design.

What are some of the main system-level concerns that can arise during the design process? Below is a helpful list for designers and teams to keep top-of-mind when starting a new project:

Understanding what issues to look out for is a great starting point but addressing all of these challenges in your wireless solution is never an easy task. We’ve provided some additional detail on potential approaches that may be helpful in your next Wi-Fi CPE designs.

Wi-Fi devices operate in unlicensed bands, and therefore do not require a formal licensing process. However, device manufacturers are still obligated to comply with differing regional governmental regulations (Figure 1) and undergo certification testing for each region where the product will be sold. These regulations continually become more difficult to meet as they change to meet evolving standards. Manufacturers typically try to minimize the number of different SKUs to meet these regional requirements. The optimal approach is to build a single SKU that meets the standards for all regions.

Regional regulatory domains apply differing criteria in areas such as channel usage and power level when monitoring Wi-Fi bands. For example, the U.S. Federal Communications Commission (FCC) requires the use of channels 1 through 11, while the EU uses channels 1 through 13 (Figure 2). The permitted RF output power levels also differ slightly between the Americas and the EU. 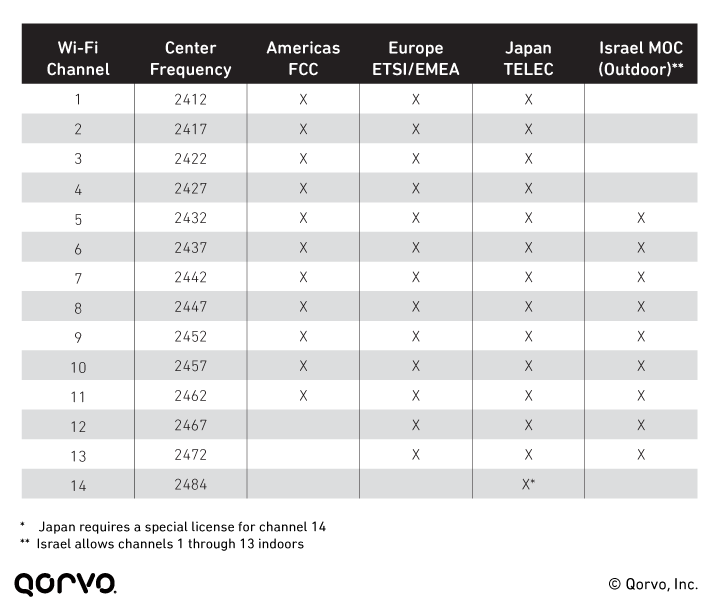 Thermal issues are a critical consideration in Wi-Fi CPE units. RF complexity is increasing as access points integrate more standards and capabilities, including mesh networking. This added complexity further builds the risk of thermal problems. In a home environment, today’s products can reach internal temperatures of 60°C or more when the room temperature is only 25°C. Overlooking these thermal considerations can endanger critical FCC or EU certification, resulting in additional redesign costs and delaying time to market. 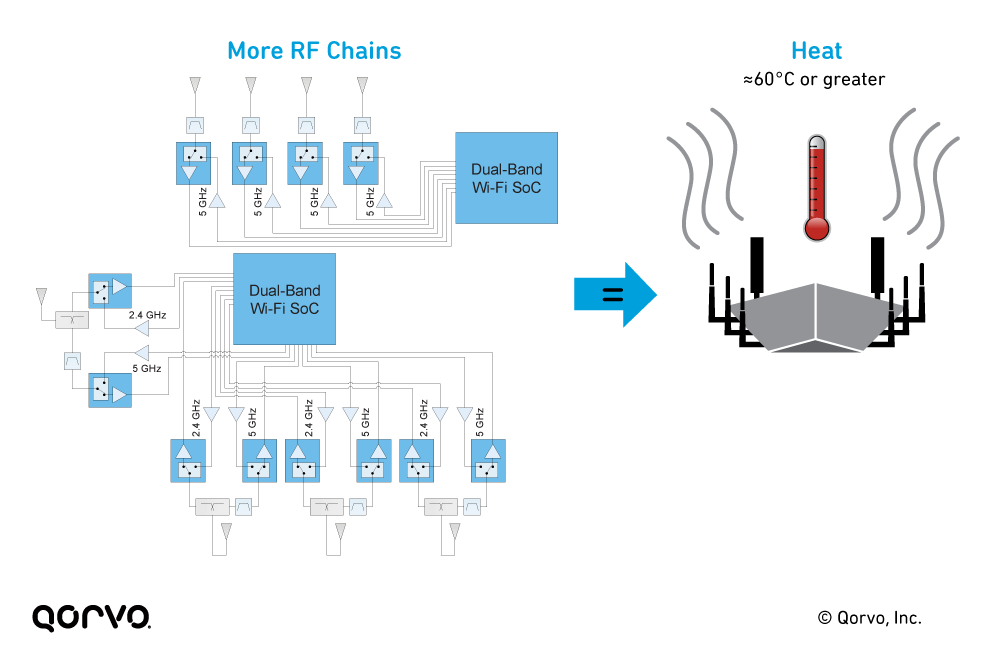 Solving the challenge. Engineers who strive to address thermal issues earlier in their unit design process have a better chance of success. Adding a heatsink or fan to the design is costly — but it’s even more expensive to retrofit them after failing certification. Because access points now include so many RF paths and radios, it is critical to choose components that minimize thermal issues. Seeking out RF front-end (RFFE) modules and other components with lower power dissipation and reduced thermal drift will greatly reduce the risk of thermal issues for the unit.

Early in any design process there is a basic understanding of the features that the Wi-Fi unit will have, including software aspects. When selecting RF modules, it’s important to consider not only performance but also whether they will be able to communicate with other components. Electronic components in the Wi-Fi unit communicate with each other via logic pins. These GPIO (general purpose input/output) pins are controlled by software. Problems can be caused by a mismatch between the pin configurations of different components within the system.

Solving the challenge. While designing and laying out the integrated circuitry within the unit, be sure to account for how each component will communicate with others. Ensure that you choose components (such as RFFE modules) that have the correct number and layout of logic pin inputs/outputs. This will ensure they can communicate with other devices within your design and the components logic table (Figure 4).

Wireless devices are everywhere. With the large number of radios and RF signal paths within and around Wi-Fi CPE devices, there are inevitable concerns about coexistence and interference. For example, smartphone LTE radios near the unit or even smart light bulbs operating in the 2.4 GHz band can interfere with the Wi-Fi signal, causing performance issues (Figure 5). 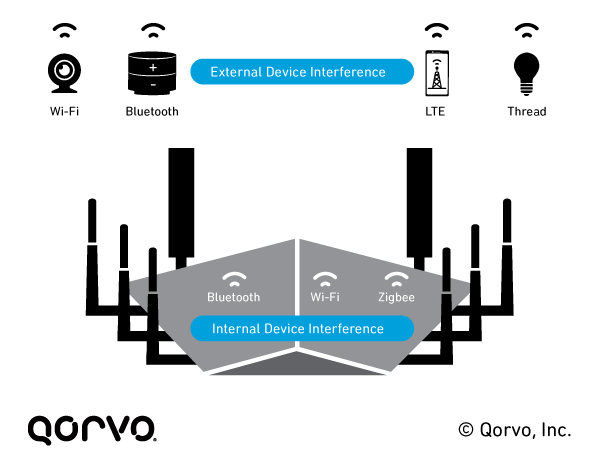 Solving the challenge. RF Filters are key to solving potential interference issues, helping to ensure the CPE unit can meet regulatory requirements in the U.S. and other countries. RF filters prevent interference between Wi-Fi signals and neighboring frequencies used by other standards; they are available as discrete components and embedded into RFFE modules.

One concern with RF filters is thermal drift as the frequency response tends to shift when the temperature changes. This can reduce the unit’s performance, increase power consumption and even cause problems with certification, so it’s important to choose filters with low thermal drift. The issue is often overlooked, because designers typically create products at room temperature and bench-test at the same temperature. However, in a real-life customer application the unit’s internal temperature can soar to 60°C or even 80 °C.

Filters based on bulk acoustic wave (BAW) technology are ideal for Wi-Fi products because they have best-in-class temperature stability, which provides advantages during certification testing by the FCC or other regulatory bodies.

BAW Wi-Fi band-edge filters also allow designers to push the limit of RFFE output power even when using channels at the edges of the allocated Wi-Fi spectrum, while staying within FCC requirements for power spectral density. Band-edge BAW filtering therefore allows operators and manufacturers to deliver high-speed data and wide bandwidth by exploiting spectrum that might otherwise be unusable.

During PCB layout, it is important to avoid chipset pin-out RF crossovers, such as a transmit line passing over a receive trace. All too often a board layout is completed, and the engineer finds out one or more RF lines are not properly isolated from other RF pathways. This can be a big headache if it is discovered near the final testing or certification stage of the design.

Solving the challenge. Communication between the design teams is essential to mitigate these issues. Working cohesively on the system design from an early stage can increase your chances for success and allow design teams to catch potential issues early, before they cause problems.

Wi-Fi CPE devices play an integral role in people’s lives, delivering convenient services, immediate access to information, and greater efficiency. But creating these extremely complex devices can be tricky. The keys to successful Wi-Fi CPE designs are communication between designers, knowing what to look for in advance and approaching the design as a system. Choosing the right RFFE products can result in fewer SKUs and mitigate or solve system-level design challenges such as thermal and coexistence issues. This leads to fewer design iterations, faster time to market and a better ability to meet FCC certification requirements.