As exhibitors finish packing up their 5G wares and branded booth displays and head for the Barcelona Metro, it’s time to look back on another memorable Mobile World Congress. The 2019 edition of MWC certainly didn’t disappoint. There were plenty of jaw-dropping demos, gadgets galore and new news about 5G, so I’ll do my best to summarize a few highlights in what I call the 5 Gees of MWC19.

Thanks, Captain Obvious. While the buildout of 5G networks is obviously accelerating, what’s surprising is the pace at which handset makers are turning the crank on 5G handsets. Qorvo’s Mobile Products president Eric Creviston noted at MWC that consumer awareness of 5G is very high and that “they want to ‘future-proof’ phones they buy this year by having 5G capability, even if the network coverage isn’t in place yet.” If you literally have a minute and want to see where 5G is headed, check out Eric’s 5G in :60 video series on Qorvo.com.

Proving Eric’s point, Barcelona was the launch site for new 5G handsets from Huawei, Xiaomi, LG, Samsung and ZTE. Among those demonstrating 5G handset prototypes were Alcatel, OnePlus, Oppo and Sony. Now, if only they could find a 5G network to run on!

Gee, what’s with all the folding phones?

Based on the armor-plated glass display in Samsung’s booth, I thought they were showing off the Hope Diamond or the Star of India. Turns out, it was their new Galaxy Fold smartphone. This limited edition and smallish (4.6 in. folded display) transforms from smartphone to a 7.3 in. seamless screen tablet when opened. Interestingly, Huawei’s new Mate X foldable phone — not Samsung’s Fold — earned Best in Show honors from PCMag. Galaxy Fold is priced at $1,980, while Huawei’s Mate X tips the scales at a hefty $2,600. That’s a lot of clams for a clamshell!

5G’s secret sauce is its promise of ubiquity and low latency, and there were plenty of low-latency demos at MWC19. Attendees could play 5G-powered virtual ping pong, take a spin in a virtual connected car or dare to don VR headsets and enter the “Hyperglobe.” This creative demo at the Deutsche Telekom booth was powered by 5G at millimeter wave frequencies (59 to 61 GHz) and allowed players to interact with a virtual object in virtual space.

If you happened to visit the GSMA booth and meet Sophia, you know exactly what I mean. Sophia is the creation of Hanson Robotics and was equal parts creepy and informative at MWC19. Sophia interacted with attendees and offered her opinions on 5G, AI and the IoT. As if her realistic facial expressions aren’t enough, she also has her own Facebook page. If she sends me a friend request, I swear I’m really quitting Facebook this time! 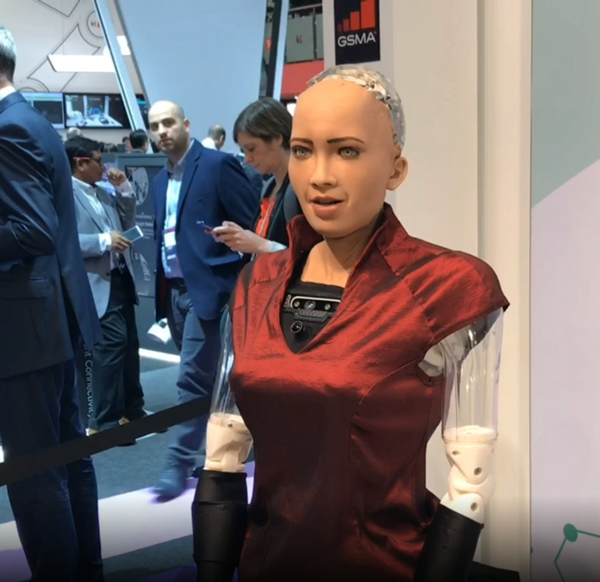 There was also a host of less creepy robotic demos, including industrial assembly-line robots, a coffee-serving robot that kept attendees well caffeinated and my personal favorite: a robotic lawnmower from Husqvarna. Yes please!

After a long week spent looking at the future of mobile, it’s back to the present, non-virtual reality and my Husqvarna push mower.

Hope to see you next year in Barcelona!