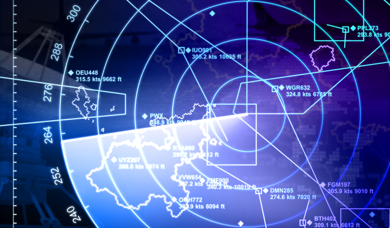 The ever-expanding appetite for data is driving strong growth in satellite communications (satcom), especially in higher-frequency bands. But, instead of concentrating on the lower frequency ranges, many companies are focusing on higher frequency Ka-Band, which provides more allocated spectrum for applications such as internet access and 5G.

Operating in Ka-band creates new challenges in RF power amplification due to an increase in video bandwidth requirements and the need for high linear power to support multi-carrier systems. Thanks to advances in semiconductor technology, GaN PAs have increased performance and are now an attractive alternative to high power vacuum tube amplifiers.

Satcom equipment plays a vital role in the daily lives of people across the world. It supports a broad variety of applications in telecommunications, weather monitoring, aeronautical communications, maritime and military uses, as well as navigation. Satcom in commercial aviation has satisfied the need to be always connected with in-flight connectivity services. 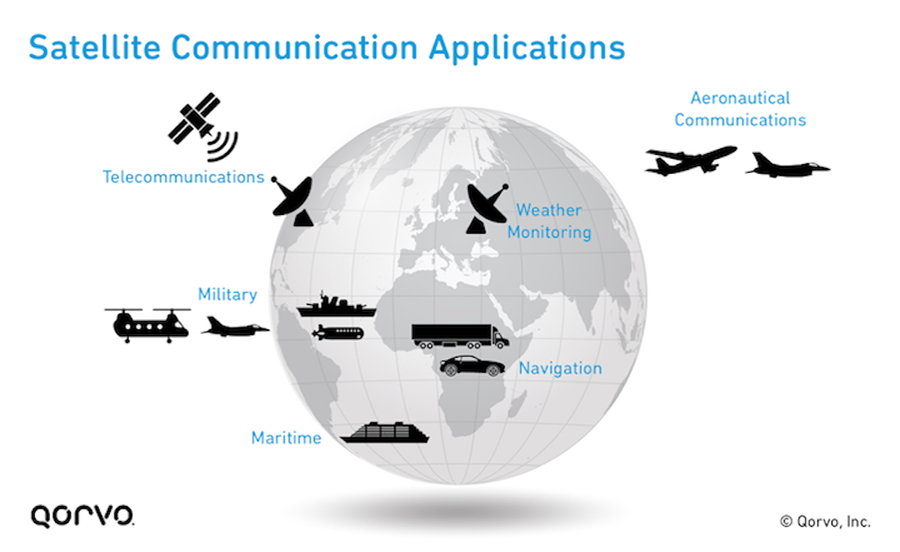 The explosive growth in consumer data traffic, 5G, big data, and artificial intelligence will further propel the global expansion of satellite systems and services – according to Strategy Analytics – which forecasts the market will grow at 5.4% a year to reach more than $93.6 billion in 2028.

This growth is driving change across the satcom landscape, with some companies planning huge constellations of high-throughput satellites to support the demand.

Responding to the increasing demand, the satcom industry has moved to higher-frequency bands, where more bandwidth is available. In the Ka-Band, 3.5 GHz of bandwidth is available for satcom — over 4x more than in other commonly used bands. It’s become widely used, especially for uplink (earth-to-satellite) connectivity.

The below table describes the bands used in the Satcom industry. In the Ka-Band, many high-profile users include startups like Elon Musk’s SpaceX and Amazon’s Project Kuiper. These two organizations are planning to launch thousands of small satellites to provide high-speed internet access to consumers and businesses worldwide – including coverage for remote and underserved areas that are beyond the reach of other broadband services. Moreover, there are other organizations following a similar path to take advantage of the new revenue streams opened by the satcom market. 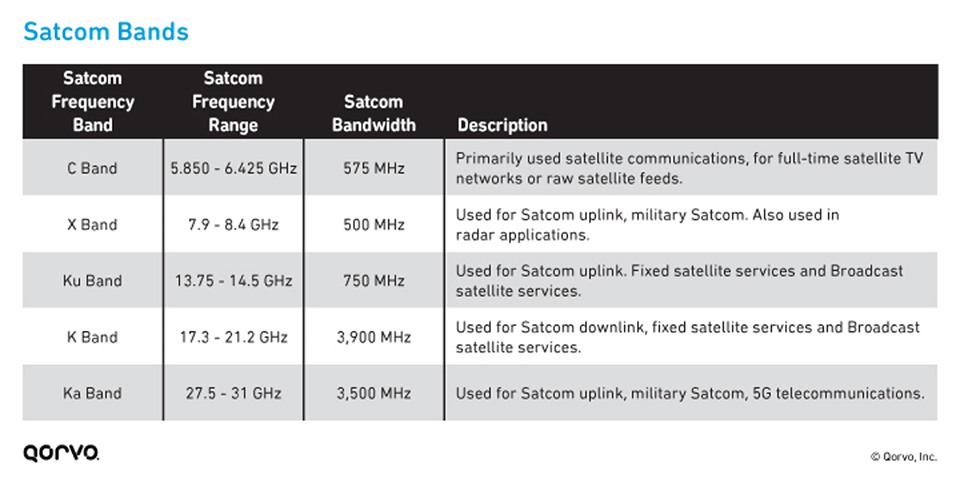 Because the Ka-Band supports many revenue streams like stationary and mobile equipment, including satellite gateways, airborne and marine systems, and portable satcom man-packs, it is a key band to exploit.

Traditionally, traveling wave tube amplifiers (TWTAs), a type of vacuum tube, have been the mainstay for power amplification in satcom applications because of their ability to produce high power while maintaining high efficiency.

Advances in GaN semiconductors are changing that trend. This is in part due to RF performance improvements, though it is also attributed to robustness and reliability in comparison to tube amplifiers. Solid state power amplifier customers combine many of the latest GaN power amplifiers to achieve 100W+ of RF output power, making GaN an attractive alternative instead of TWTAs.

The figure below shows a typical satcom RF configuration using a GaN PA. 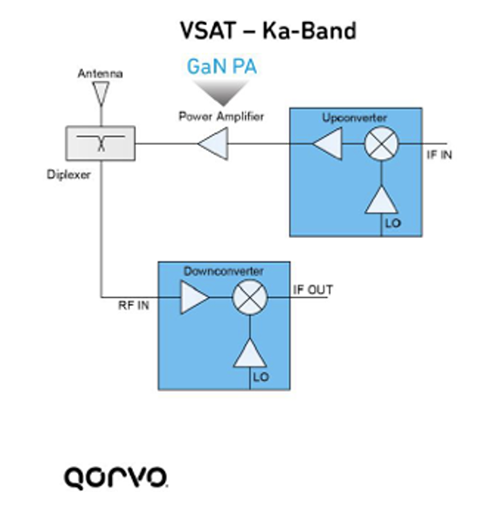 GaN PAs are also well matched to a major change in satcom architecture: the shift from single antennas to phased arrays of multiple antennas. This change is taking place both on satellite and within ground terminals.

Some of the most ambitious new applications use thousands of satellites in low earth orbit (LEO) – 100-500 miles above earth’s surface – much closer to earth than most traditional satellites. See the figure below. A big advantage of LEO is lower latency – roughly 20 ms round-trip – which is vital for applications like internet access. 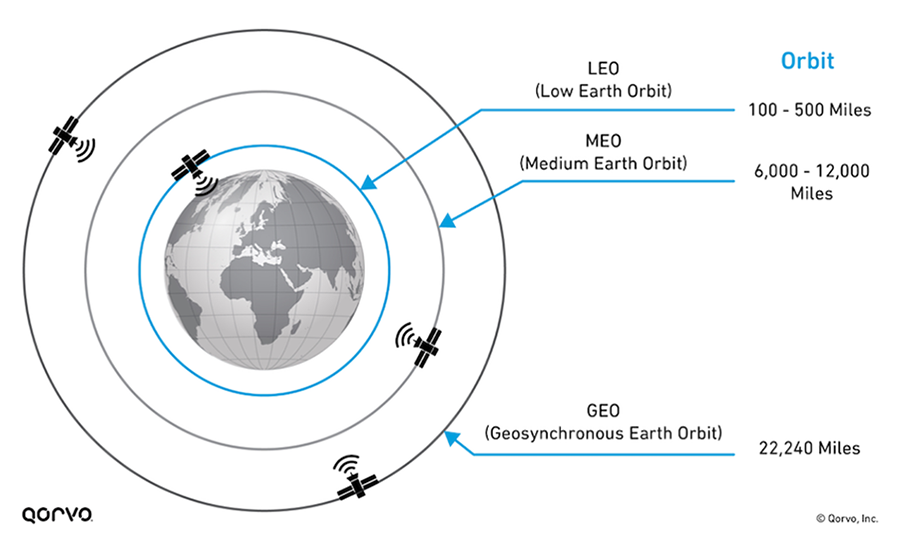 LEO satellites orbit the earth much more rapidly than satellites at higher orbits – traveling from horizon to horizon in only 15 minutes. To maintain continuous communication links with these satellites, earth-based equipment must track them as they zoom across the sky.

This creates a new challenge. Traditionally, earth-based satcom equipment has used mechanically steered antennas to track satellites. But this approach isn’t practical for LEO satellites due to the potential wear-and-tear on a system that has to sweep from horizon to horizon every 15 minutes; the maintenance and upkeep for the equipment needed to support very large LEO constellations would likely break the bank.

Electrically steered phased arrays avoid this problem, because they eliminate the need for mechanical movement to track satellites. Instead, these phased array systems have many small antennas that can continuously change the direction of the signal by adjusting the phase of the individual antennas within the array.

While designs based on a single TWTA were well suited to high power single-antenna systems, designs based on GaN PAs are a natural match for multi-antenna phased arrays. GaN also makes it possible to build a system that’s lower-cost, lighter and more compact.

Looking to the future, satcom architectures are in a state of change. Higher linear power over wider bandwidths is the present trajectory in the Ku/K/Ka-Bands. System operators are moving even higher in frequency to V-Band (40-75 GHz) where bandwidth is even greater than Ka-Band. As Ka-Band was once a frontier in satcom, it is now an established and strong market segment with many operators and equipment providers. V-Band is viewed as the new frontier in satellite communications. With the continued innovation we have seen across the satellite industry, the duration from adoption to maturity in V-Band could be faster than anyone expects. It is expected that GaN will play in this higher frequency market as well.

Qorvo offers a wide range of GaN devices for satcom ground-based applications and satellites. Some newly developed products recently added to our portfolio are shown below.