A Brief Overview of the History of Wi-Fi Standards

When assessing the current state of affairs in the world of Wi-Fi standards, it is important to have a general understanding of the history of Wi-Fi protocols so that recent developments can be viewed in the proper context.

An important historical note is that Wi-Fi has its roots in the commercial computer industry as opposed to the more regulated utilities of the telephone industry, where operators were originally governmental bodies, and where 5G currently resides today. Wi-Fi's historical separation from the phone industry is illustrated by the license-free nature of the Wi-Fi frequency bands. For a mobile phone with a service subscription, a SIM card is required to ensure that phones are connected to their prescribed service provider – ideally preventing the illegal use of the network. This distinction is important, especially in the smart home setting, where the lack of a SIM card, or similar model, makes it easier for the consumer to manage all their various Wi-Fi equipment.

The standardization body for wireless data communication is the Institute of Electrical and Electronics Engineers (IEEE) which is rooted in the computer industry. In addition to academics and regulators, the IEEE has a large engineering membership, most of whom are sponsored by their employer companies.

Since 1997, the IEEE has developed standards in the "unlicensed" bands – bands that have been set aside by the government for "free usage," based on a set of rules with limited power, so that the interference range for realistic applications stays local. These bands are called ISM (Industrial, Scientific and Medical) bands and can be found in the 2, 5, and 60 GHz frequency ranges. 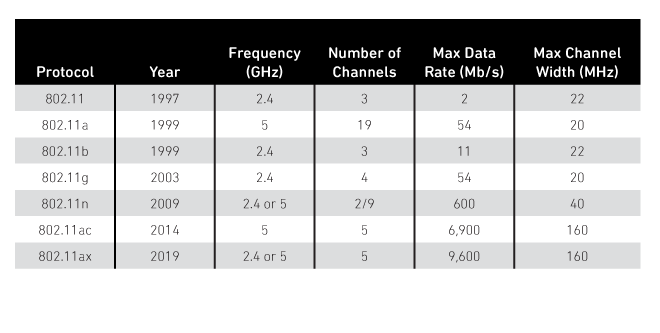 Despite the fact that nobody could keep track of the array of acronyms underlying Wi-Fi – IEEE 802.11b, .11a/g, .11n, .11ac, etc. – each new version has provided a clear step forward in raw data rate. In four generations, that rate has gone from 11 Mbps to 6.9 Gbps – an increase of more than 650 times! After all, raw data rate is the "name of the game." This comes as no surprise, since Wi-Fi is about pure data communication.

With the imminent arrival of Wi-Fi 6 and a new maximum raw data rate of 9.6 Gbps, the Wi-Fi Alliance has recently announced a campaign to market the different 802.11 Wi-Fi standards using the chronological names – Wi-Fi 6 as the next generation of Wi-Fi (802.11ax), Wi-Fi 4 for .11n, and Wi-Fi 5, .11ac respectively. But given the slow appearance (ratification is now planned for early 2020) and marginal improvement of .11ax, one might wonder if this is an indication that Wi-Fi technology is running out of steam.

Don't be fooled however, behind the acronyms there is a real shift going on from raw data rate toward multi-channel capacity via improved spectral reuse. This means that the real-life throughput experience of Wi-Fi 6 (.11ax) may realize an increase of as much as four times that of Wi-Fi 5 (.11ac). Let's explore further as this has consequences for consumers, as well as product builders.

Interference: For the consumer, there are always two important concerns for Wi-Fi. The first is performance (namely data rate). The second is range (e.g., "how can I get the highest speed in every corner of my house, backyard or basement, etc.?").

In urban areas, consumers have grown accustomed to a common scenario: Turning on a laptop in a home or public place and viewing the abundance of access points visible when trying to find a Wi-Fi network. Many of these named routers are using the limited number of overlapping channels available. Sharing these frequencies can cause interference on those channels which often leads to slower data rates, and frustrated users.

When two devices talk through each other, using the same channel at the same moment, the messages are likely to get mixed up, causing each to be sent again and slowing the rate of data transfer. It's no surprise then, that the throughput in dense environments can collapse in continuous retransmissions.

This form of interference is made worse by the fact that routers and access points have attempted to improve range by simply increasing the output power. Anyone who has been to a crowded party can relate to this scenario – as more people speak louder to be heard over the noise of the room, the general volume increases and any real opportunity to communicate goes out the window. In a similar way, increased output power causes increased interference. Higher output power in some channels of a frequency band may causes the signal to "bleed" into adjacent channels, causing the capacity of the band and the total Wi-Fi system to degrade further. What to do?

Distributed Wi-Fi: For Wi-Fi 6, the goal is less about higher raw data rates and more about using better communication protocols to optimize the use of as many channels as possible – at the same moment and in the same space – in the 2.4 GHz or 5 GHz bands.

Let's examine an example of how this is useful. Imagine a modern family living in a house with multiple rooms, running different applications at the same time. In the past, this meant that everyone was using the same channel to communicate with the central router simultaneously with all the interference limitations discussed above.

With the distributed model planned for Wi-Fi 6, every room in the house has an access point running on a different wireless channel. Access points are wirelessly connected over Wi-Fi to the central router, providing for much less overlap in signals and higher individual load speeds. This is a true Wi-Fi "system," providing improved total system capacity and throughput by using multiple channels at the same time without interfering from one another.

If you wish to avoid interference from other wireless protocols – certain to become an increasing issue as more cell towers radiate signal into the house – like those in LTE or 5G devices for instance, using BAW filters inside Wi-Fi access points allows data to be transmitted in a much more efficient way.

The goal of Wi-Fi 6 (IEEE 802.11ax) is full coverage of a home (or a building), and maximum performance in every room – resulting in maximum overall capacity at the system level.

Thermal issues, and how to solve them: New challenges are emerging with the implementation of Wi-Fi 6 as Front-End Modules continue to use more channels. Thermal build up inside of routers has increased compared to Wi-Fi 5 (.11ac) leading to a need for more efficient components when designing for updated Wi-Fi products. More efficient and highly integrated components provide for smaller form factors, reducing the need to add fans or other ventilation to mitigate added heat.

In addition, for high data rates, high linearity is required, which can also add to the rise in heat. Digital pre-distortion is one great way to design around thermal issues, as it improves efficiency in Power Amplification, among other things. As the signal provided by a chipset is digitally pre-distorted, this solution frequently requires collaborative work between a chipset vendor and an FEM manufacturer.

In parallel to the short-term developments around Wi-Fi 6, the industry is also investigating additional future standards.

802.11ad/ay:  The race for more bandwidth will continue with the 60 GHz family of IEEE 802.11 standards (originally classed under the WiGig Alliance, but now back in the Wi-Fi Alliance). The first one, IEEE 802.11ad, has been available for several years, but has not been widely adopted. The next iteration (.11ay) is already in the works, as shown here:

Unfortunately, there is a potential problem with the 60 GHz band – it cannot penetrate walls, and "stays" in a room.

But this may not really be a problem after all. If the Wi-Fi signal stays in the room, that means it does not interfere with the usage of the same channel or frequency in other rooms, and definitely not the neighbor's signal. This sounds kind of ideal, doesn't it? One may wonder – if 60 GHz, 8011.ad has existed for years, why hasn't the market jumped on it yet?

6 GHz Bands for Wi-Fi 6 (.11ax): In addition to the 2.4 and 5 GHz bands, there has been recent work on a next-generation Wi-Fi standard that would be the first designed specifically to include support for the 6 GHz band. It may also provide up to a 400% increase in throughput placing the new Wi-Fi standards on a faster release pattern that keeps up with current market demands. The expectation is that the 6 GHz band will be approved for unlicensed use by 2020 – for both Wi-Fi and cellular use. The idea is then to adapt Wi-Fi 6 (.11ax) for 6 GHz by that 2020 date, with an enhanced 6 GHz implementation ready soon thereafter. However, today, Wi-Fi 6 still needs a lot of work: The industry views Wi-Fi 6 (.11ax) in similar terms to Wi-Fi 5 (.11ac) – a point-to-point protocol instead of the multi-channel communication tool intended for the new standard. The effective adoption of using multiple channels simultaneously in the existing bands is a first priority as 6 GHz brings more complexity and therefore more cost.

What does all this mean for the future of Wi-Fi? There are several interesting consequences and conclusions to draw: