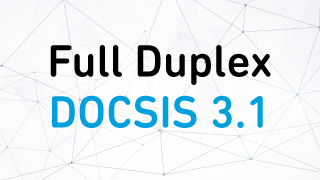 5G is the buzz word of the year for mobile devices and cellular infrastructure — but cable TV infrastructure is doing its part to upgrade its system capacity and support the transition to 5G.

One breakthrough CATV technology currently in development is Full Duplex DOCSIS 3.1, which will significantly increase the upstream capabilities of existing hybrid fiber-coaxial (HFC) cable networks. What is Full Duplex DOCSIS? How is it different from DOCSIS 3.1 technology deployed today? What are the challenges of this new standard? Let's explore.

The state of DOCSIS 3.1 today

DOCSIS (or Data Over Cable Service Interface Specification) originated in the late 1990s when the cable industry moved from an analog to a digital transmission system. DOCSIS 1.0 allowed a digital signal to transmit over existing analog coaxial cable systems, and subsequent releases of the DOCSIS specification have brought increased data speeds and capabilities to the system, as shown in the following table.

A number of MSOs in the U.S., including Comcast, Mediacom and Midco, have already deployed DOCSIS 3.1 to multiple cities, and 2018 will likely see even more deployments across more MSOs.

The move to Full Duplex DOCSIS 3.1

Even with the latest DOCSIS 3.1, the upstream capacity of the cable industry’s HFC network likely isn’t sufficient in the long run. The goal is to achieve 10 Gbps symmetrical streaming — or 10 Gbps bidirectionally, downstream and upstream — for several reasons:

The most challenging problem is that it’s expensive to tear up existing coaxial cable or upgrade the head end. Instead, cable MSOs want to make their existing copper coaxial networks last longer and are looking for alternative ways to increase the bandwidth of cable networks. Full Duplex (FDX) DOCSIS is their answer.

Full Duplex DOCSIS is an extension of the DOCSIS 3.1 specification that significantly increases upstream capacity and allows cable MSOs to achieve 10 Gbps speeds downstream and upstream.

Cisco and Intel had proof-of-concept demos at ANGA COM and SCTE in the spring and fall of 2017 to show that FDX is possible, and CableLabs released the final Full Duplex DOCSIS 3.1 specification in October 2017. Since then, suppliers are feverishly working to develop nodes and modems to support FDX, with the first FDX nodes due to Comcast this summer for initial trials. We should start seeing field trials from some MSOs in late 2018 or early 2019, and the first North American commercial deployments of FDX in 2019.

To achieve full 10 Gbps symmetrical streaming, the cable system must change from FDD to full duplex. In FDX DOCSIS, MSOs can use the full spectrum for upstream and downstream transmissions, in both directions at the same time, with overlapping transmissions at some frequencies. 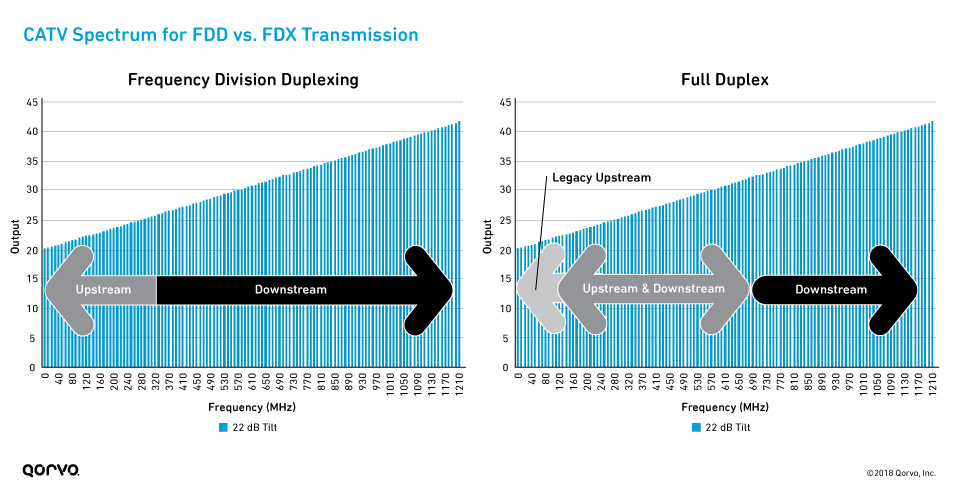 Achieving full-duplex symmetrical streaming faces many challenges. Let’s examine some of the biggest ones.

It’s a race to develop a component that meets the DC power targets and gets the echo cancellation technology right.

Full Duplex DOCSIS is a complex space, but Qorvo is working hand-in-hand with many customers to develop components and solutions that meet the rigorous requirements of FDX. Here are some of our featured product offerings to support Full Duplex DOCSIS.

Qorvo is currently the only supplier in full production with an amplifier that provides the highest 76.8 dBmV composite output power, with our RFPD3580 hybrid GaN CATV amplifier.

DPD is used in many of our wireless devices, but the technology isn’t as common in CATV. We’re working with key DPD developers to optimize our RF solutions in CATV devices — such as the QPA3250, a hybrid power doubler amplifier that is optimized for DPD in FDX. These devices will enable the same MER and output power but at a lower current. The QPA3250 will be released in late 2018.

The circuit that puts the tilt on the signal is called the equalizer. Today, in most nodes, a plastic plug-in module plugged applies the required tilt. Unfortunately, this isn't always ideal because the tilt value is fixed (e.g., 10 dB).

In contrast, our QPC7336 uses the latest silicon on insulator (SOI) technology, providing ranges of the desired tilt. The QPC7336 is capable of a tilt range 5-15 dB, which can be controlled using a microcontroller and a DAC (digital-to-analog converter).

In most HFC systems, tilt is usually set in two stages in the amplifier. By using two of our devices in a socket, cable operators have the flexibility to change the tilt remotely, without having to send a repair truck to a physical location. It’s an innovative approach, and we’re proud to have one of the few solutions for this technology.

FDX: A race to get it right

Full Duplex DOCSIS 3.1 faces a number of challenges in development and deployment, but it’s an exciting time in the industry. The cable manufacturers are working directly with RF providers, including Qorvo, to help decrease the overall DC power, increase overall RF power, and design custom solutions.

To learn more about Qorvo's solutions for DOCSIS 3.1 and Full Duplex, download our CATV Product Selection Guide or view details for the products mentioned in this blog post: 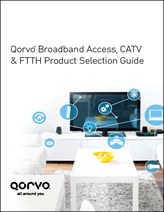 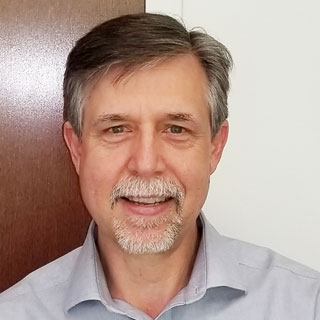 Bob is the proud recipient of a Qorvo award for his work in introducing a whole set of new solutions that are making a difference for customers in overcoming RF challenges for cable TV and fiber to the home (FTTH) applications. He’s part of a dedicated team of RF experts with insight on trends and innovative solutions for cable MSOs and customers alike.