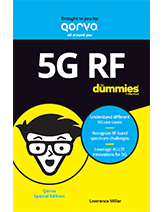 Active Antenna Systems, beamforming, beam steering, Fixed Wireless Access (FWA): the transition to 5G is bringing new terminology and technologies to life in the commercial space. At its heart, 5G begins with the carrier network and how it enables these next-generation technologies. This blog post explains some of the key RF communication technologies that will enable 5G base stations and networks.

This blog is an excerpt from Chapter 4 of our e-book, 5G RF For Dummies®.

5G Begins with the Carrier Network

One of the first major applications will be Active Antenna Systems (AAS) in the millimeter wave (mmWave) bands, providing Fixed Wireless Access (FWA). FWA provides an initial stepping stone toward 5G in the mmWave bands. Carriers and infrastructure manufacturers alike have been conducting trials and plan to offer this service as a more scalable and economical way to deliver broadband. Although this service is for nomadic and fixed users, it is being designed with true mobility in mind. This allows carriers to get their feet wet in new mmWave technologies — such as phased array antennas and hybrid beamforming — that will be the basis of mobile 5G.

A very recent twist in 3GPP standards definition — the addition of an accelerated path, called non-Standalone (NSA) 5G — as a cost-effective way to bring early 5G benefits to market without the expense of building out the 5G network core needed for standalone (SA) 5G. NSA accomplishes this by using an existing 4G 3GPP band as an LTE anchor in the Control Plane. 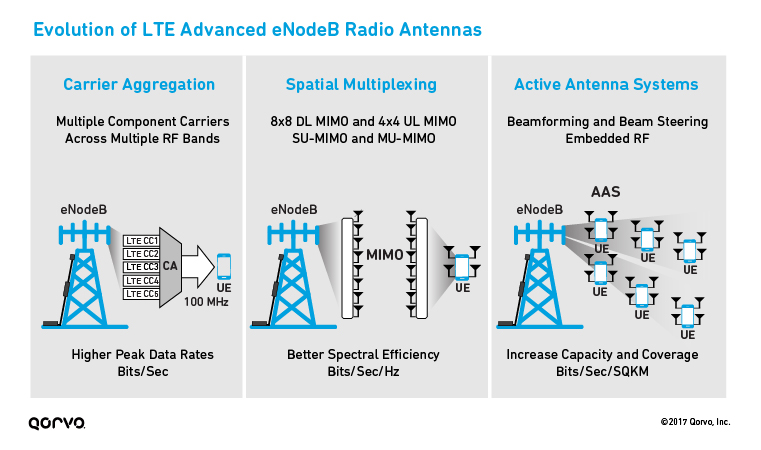 MIMO technology uses multiple antennas installed at both the source (transmitter) and destination (receiver), to improve capacity and efficiency. As shown in the previous figure, more antennas equals more data stream layers. This results in a bigger data pipe to a single user or multiple data pipes to separate users, also known as multi-user (MU) MIMO.

Massive MIMO takes MIMO to the next level. Today’s MIMO deployments typically consist of up to eight antennas on the base station and one or two antennas on the receiver. This allows the base station to simultaneously transmit eight streams to eight different users or double down and send two streams to four users. Massive MIMO scales to dozens or hundreds — theoretically thousands — of antennas, providing capabilities and benefits that include the following:

The next figure illustrates how an AAS/full-dimension (FD) MIMO base station can direct beams in both the horizontal and vertical directions. This operation dynamically points the antenna pattern on a per-user basis, providing a better link and higher capacity to that user. In turn, this allows him to offload his traffic and free the radio resources more quickly, which can then be used by others, resulting in a net increase in aggregate capacity for the entire cell. 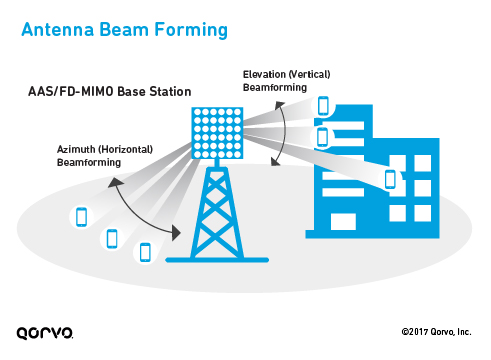 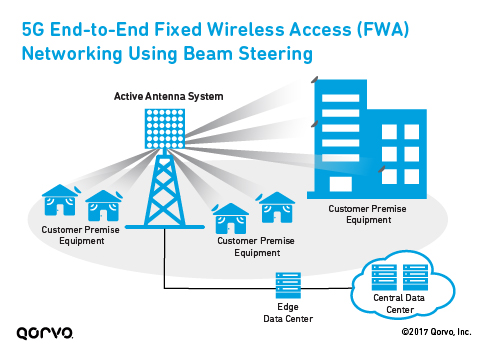 One of the obvious advantages of 5G FWA is its ability to support very high peak data rates without requiring dedicated fixed facilities for each individual user. To enable higher peak data rates and greater system capacity, FWA radios will make use of new higher frequency bands from 24GHz up to 42GHz and potentially even higher.

Using larger antenna arrays provides additional beamforming to overcome more severe propagation challenges encountered at mmWave frequency ranges. These arrays can have hundreds of elements but due to the short wavelength are extremely compact. For example, a 64-element antenna array at 30GHz is only 40 mm x 40 mm. Large arrays provide very focused beams that can be redirected in less than a micro-second. In addition, the large phased array can act as a single array or as multiple independent subarrays with unique beams directed to service multiple user terminals simultaneously on the same frequency resource. The following figure shows a block diagram of the 2x2 RF front-end modules in the per-antenna RF subsystem of an AAS antenna array that comprises an AAS cell tower. 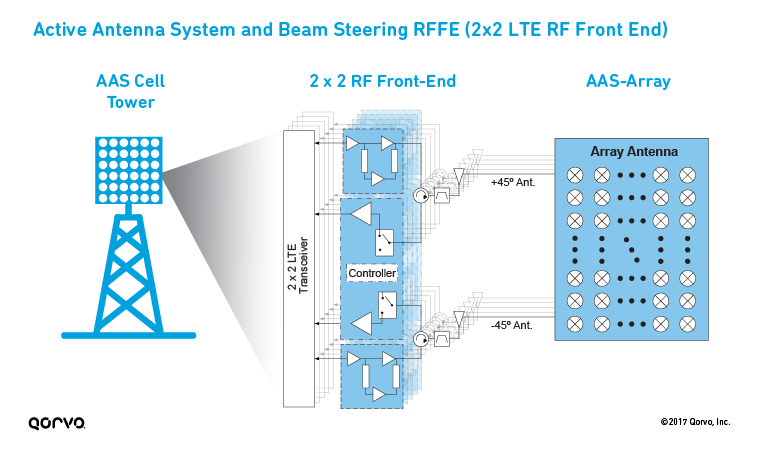 Want more details about what's to come with 5G? Download a copy of our latest e-book, 5G RF For Dummies.

– Excerpted with permission from John Wiley & Sons, Inc., from 5G RF For Dummies.