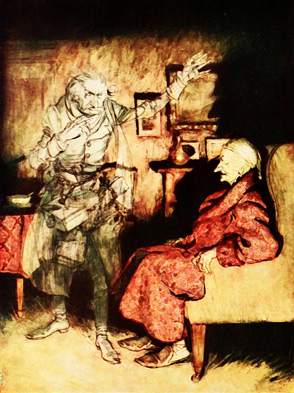 Our story begins on a cold Christmas Eve in 1966, five minutes after my uncle stopped by our house to show off his new analog car phone. He worked for IBM at the time, and I can still remember him opening the door of his car Vanna White-style to reveal the status symbol inside.

We’ve all been visited by old, curmudgeonly RF. As networking professionals, we know the joys of RF present, and there are enough predictions articles this time of year to get us excited about the future.

The ghost of RF past

The first of the RF spirits takes us to the 1980s, when cellular, Wi-Fi and automotive connectivity were young and innocent. RF was so old you could see it, hanging in the air like a damp, grey fog.

Only three people owned a 1G or “first generation” mobile phone – and two of them were in a lab. The first-generation cellular network used analog radio signals; every network after would be digital.

The 1990s brought 2G and the Christmas joys of dropped calls and spotty coverage. The RF industry is still wrestling with these issues today, as we work with wireless infrastructure providers and smartphone manufacturers to provide reliable coverage in every corner of the globe.

The turn of the millennium brought us ubiquitous Wi-Fi. The technology was originally called “802.11” after the underlying IEEE standard.

Wonder why that never caught on…

First came 802.11, then 802.11b/a/g/n. Remember, “a before g, especially after b,” until you hit 802.11ac and 802.11ax. The early Wi-Fi standards were almost useless with low bitrate and a range of 10 feet, but usage took off with 802.11g. Apple introduced AirPort and Intel® unveiled Centrino® built-in Wi-Fi in laptops, revolutionizing networking and eliminating the need for a plug-in Wi-Fi card.

Meanwhile, automotive was going through its own RF revolution. According to Autoweek, 1990s “factory-installed cellular telephones were popular optional equipment in high-end luxury cars.”

Hold on, my Benz is ringing.

The ghost of RF present

The second spirit brings us to 2017, where cellular, Wi-Fi and automotive connectivity are improving at unprecedented rates.

We have sailed through 3G and 4G to ultra-high speed 4G LTE connectivity. Today’s technologies combine nearly all the necessary RF components for a smartphone into a single, high performance, RF front end module the size of a few grains of rice. Small form factors have made smartphones faster and slimmer, with longer battery life and greater functionality.

Imagine if we went the other way?

“The cinder block chipset provides the weight and size needed for today’s smartphones with two strategically placed square holes, allowing smartphone users to grip with one hand instead of two.”

When it comes to Wi-Fi, consumers want performance and range. 802.11ax offers both by using as many channels in the 2.4 GHz or 5 GHz frequency bands as possible – at the same time. The result is as much as four times more throughput than 802.11ac, and full coverage of a home or building, with maximum Wi-Fi performance in every room.

Today, we’re also connecting the car. Automakers now offer GPS navigation, satellite radio, Wi-Fi connectivity, Bluetooth and even 4G LTE cellular plans for their vehicles. Vehicles will soon communicate with each other and with infrastructure over 4G and Wi-Fi networks for accident avoidance, and we’re seeing the first glimpses of an autonomous future.

The ghost of RF future

The third spirit takes us to Christmas Day 2025, when smartphones have become smart everything. Highly integrated RF solutions will allow us to reimagine smartphone form factors, and enable unprecedented speed and performance.

1G, 2G, 3G and 4G has given way to 5G, a next-generation wireless network promising ten-times the speed and ultra-low latency for mobile and Internet of Things (IoT) devices. We are likely to see the first systems in 2018, starting with Fixed Wireless Access (FWA). FWA will deliver 5G speeds over millimeter wave (mmWave) spectrum between a cellular base station and some “fixed” location – like a small cell in a packed sports stadium.

Imagine thousands of fans live-streaming a Hail Mary pass with no buffering.

Finally, mmWave will come to mobile in the early-to-mid 2020s. In the meantime, expect to see the LTE icon more often on your smartphone screen.

802.11ac and 802.11ax Wi-Fi will continue to power smart connected homes. We will see the proliferation of 4K/HD video, and smart appliances, thermostats, sensors and locks that alert us to energy savings, water leaks and break-ins – so long as these devices can understand each other.

IoT devices currently “talk” to each other in languages like IEEE 802.15.4, Zigbee® 3.0, Thread and Bluetooth Low Energy (BLE). In the future, we hope to see a unified wireless standard – but just in case, our engineers are “future-proofing” devices by allowing them to communicate in multiple languages.

Autonomous vehicles will rely on 802.11p and 5G for ultra-low latency, real-time connections. With latency reduced to milliseconds for signals between cars, and between cars and infrastructure, “driverless” vehicles will become much safer, less expensive and more popular.

RF is continually changing the many ways we work and live. Be sure to thank the ghosts of RF, when you awaken this holiday to an Alexa under the tree.