This is the third blog in an ongoing series looking at the importance of GaN HEMT nonlinear models for rapid power amplifier (PA) design success.

In simple linear RF/microwave amplifier design, you can use single-bias S-parameter data to design matching networks that, for example, maximize the gain at a narrow frequency band or achieve a flat gain over a bandwidth.

For gallium nitride (GaN) PAs, designers need to account for nonlinear operation, including what happens with RF current-voltage (I‑V) waveforms. One way to optimize a design for nonlinear behavior is by simulating the intrinsic I-V waveforms. This blog covers:

Catch up on the other blogs in this series:

In a typical GaN HEMT amplifier application, the source is grounded and the RF input signal is applied across the gate-to-source terminals. The drain is connected to the load, and the load impedance determines the load-line trajectory that is traversed as the RF-AC input signal swings back and forth between minimum and maximum peak values.

We covered the basics of I‑V curves and load lines in our previous blog in this series, but another way to analyze the nonlinear behavior of a device is by looking at the device’s I-V waveforms — that is, by looking at the current and voltage graphs plotted over time, as shown in the figure below for a 2 GHz input RF signal.

I‑V waveforms and I‑V curves show different information. To illustrate this, we generated the example below using Keysight ADS and the Modelithics Qorvo GaN Library model for the QPD0060, a 90 W, 48 V Qorvo GaN transistor. (We assume sinusoidal signals for our purposes here.)

In PA design, “class” is a term used to describe the design approach for the amplifier. This mainly consists of the bias condition and operating mode of the transistor as the output signal is driven to its intended power level.

Three of the most basic classes are Class A, Class AB and Class B. As shown in the following figure, these modes correspond to biasing the transistor at the quiescent voltage-current points indicated by markers m2, m3 and m4 for PA classes A, AB and B, respectively. 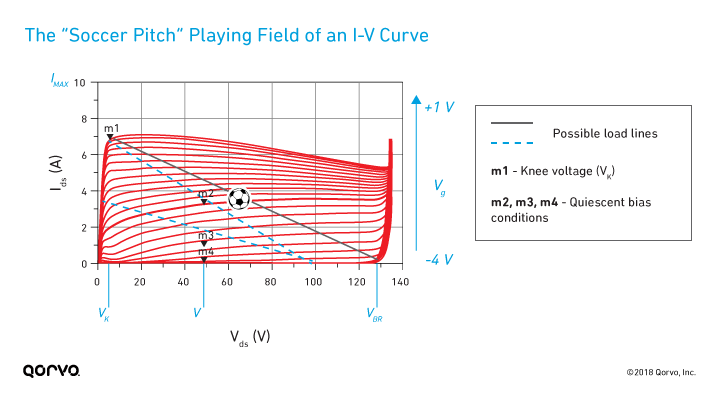 You can also consider these classes of treatment from an I-V waveform perspective. The following figure shows the results of an intrinsic I-V waveform simulation for Class A, AB, B and C at a 2 GHz fundamental frequency. These simulations were performed using Keysight ADS and the Modelithics Qorvo GaN Library model for QPD0060.

Design Tip: See the end of this blog post for the ADS schematic setup used for the following waveforms. 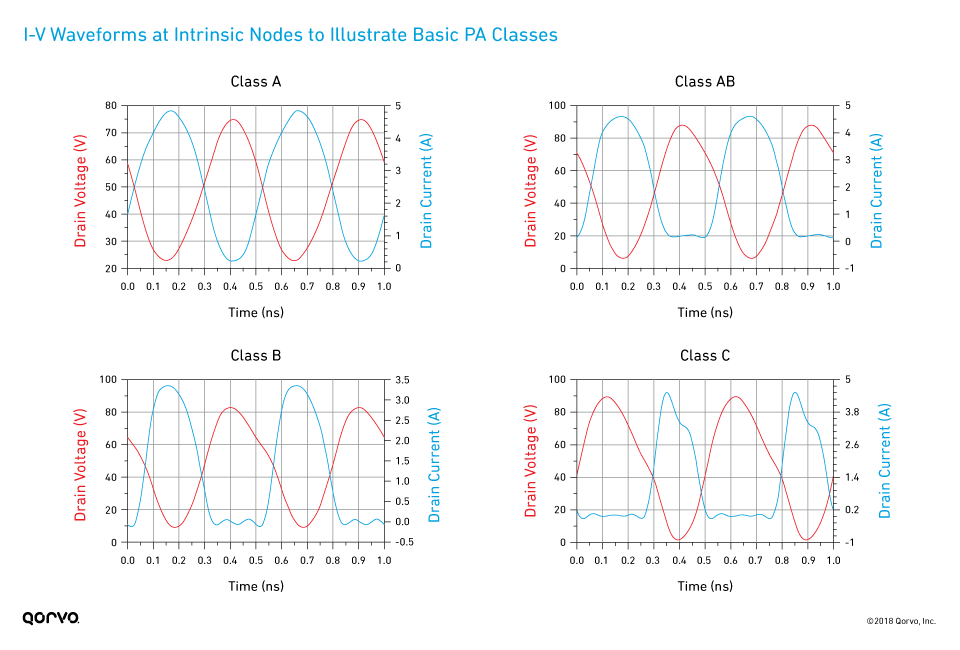 Let’s examine the expectations and nuances of these intrinsic I‑V waveforms:

Two other classes of PA operation are Class F and Class J, which are for more advanced modes of operation that focus on higher efficiency as a primary goal:

The “gotchas” of intrinsic vs. extrinsic ports

The previous figure showed the waveforms for ideal PA classes. But there’s a catch: It makes a difference where you effectively simulate the I‑V waveforms — at the intrinsic or extrinsic port.

It matters because of the device’s parasitics, which could include pad capacitances, bond wires, package parasitics and other factors that impact the performance and design of the device.

The next figure and table illustrate the difference between intrinsic and extrinsic gate, drain and source ports. 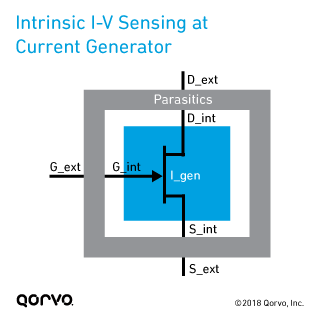 To further illustrate the differences between intrinsic and extrinsic ports, the following image depicts an example dynamic load-line plot for a smaller device “die” format from a simulated GaN HEMT model and shows the trajectory of the intrinsic (in red) and extrinsic (in blue) RF I-V waveforms as the input signal swings through an entire cycle. Note how the extrinsic cycle extends beyond the I‑V curve limits and the current swings negative due to extrinsic parasitic effects. 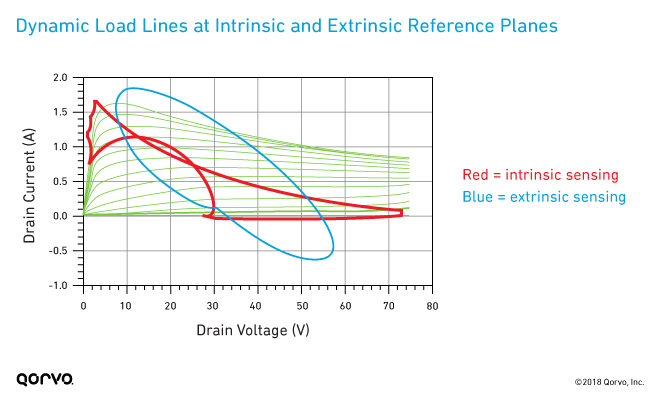 The next figure highlights the difference between intrinsic and extrinsic I‑V waveforms using an example Class F amplifier design:

Design Tip: See the end of this blog post for the NI AWR schematic setup used for the following waveforms.

But what if your intrinsic waveforms don’t reflect the desired I‑V waveforms for your operating class? Harmonic tuning may be the answer.

All of the Modelithics Qorvo GaN Library models allow the circuit designer to monitor the intrinsic voltage and current waveforms while tuning or optimizing the load matching circuit until the desired waveform shaping is achieved. This is sometimes called the “waveform engineering” approach to PA design.

To demonstrate this concept of waveform engineering, the next figure shows power sweep results for the intrinsic I‑V waveforms both before and after harmonic tuning. Compared to the initial Class F waveform plots shown in the previous section, I tuned the fundamental load impedance to optimize efficiency to a value of 71.5%. When comparing the bottom two plots, note the following:

Design Tip: See the end of this blog post for the NI AWR schematic setup used for the following waveforms.

The takeaway: Simulate at intrinsic nodes to maximize your GaN PA design

In summary, extrinsic waveforms aren’t useful for design because they aren’t constrained by the limits of the I‑V curves — and it is precisely these current/voltage constraints that determine the power capability of a device at a given set of bias/current/matching conditions.

You can then use waveform engineering to further fine-tune the design and performance of your device for your specific application.

Models, such as those in the Modelithics Qorvo GaN Library, that include access to the intrinsic voltage-current ports are required to enable designers to optimize the I-V waveforms for high-efficiency classes, such as Class F and other advanced PA operating modes (including Class E, Class J and inverse Class F) that designers are utilizing to meet the complex linearity and efficiency specifications of today’s challenging designs.

You can see a nice example that illustrates the use of intrinsic waveforms for a Class J amplifier design in a YouTube how-to video developed by Matt Ozalas of Keysight. The tutorial also includes an interactive Keysight ADS workspace you can download. The following figure is a screenshot of results from Matt’s Class J example using a Modelithics model for the Qorvo TGF2952 GaN transistor. 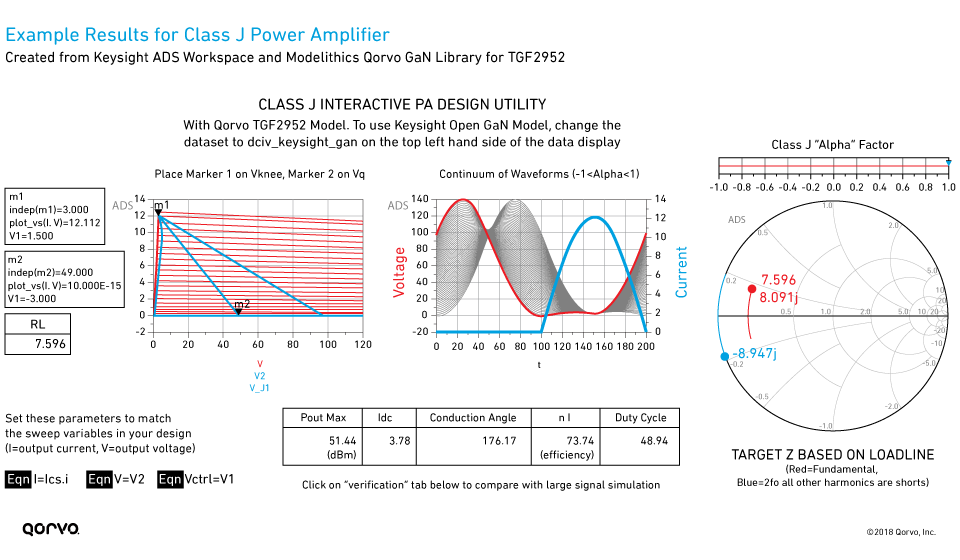 In the next part of this series, we’ll discuss how you can use models to simulate S-parameters and explore resistive stabilization that is often required for successful RF PA design.

Learn more about our nonlinear models for packaged and die Qorvo GaN transistors.

For those with access, you can also email info@modelithics.com to request an example ADS workspace and/or NI AWR project related to this blog post.

I‑V Waveforms for Basic PA Classes A, B, AB and C: The following figure shows the schematic setup used to simulate the four basic PA class I‑V waveforms, with conditions set for the Class C case. These simulations were performed using Keysight ADS and the Modelithics Qorvo GaN Library model for QPD0060. 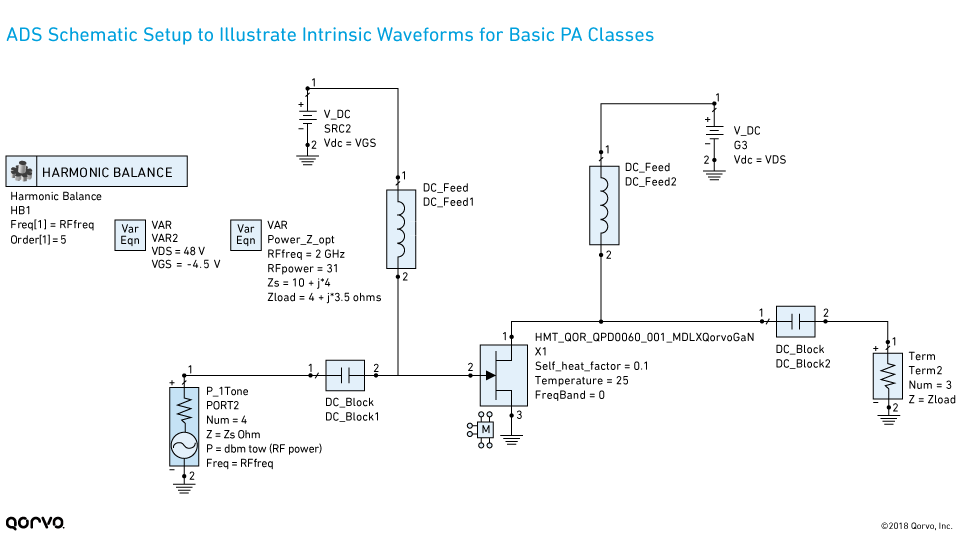 Harmonic Tuning to Illustrate Waveform Engineering for Class F Design: The following figure shows the schematic setup used to simulate intrinsic and extrinsic waveforms as well as power and efficiency under swept input power at a 2 GHz fundamental frequency. These simulations were performed using NI AWR and the Modelithics Qorvo GaN Library model for QPD0060. 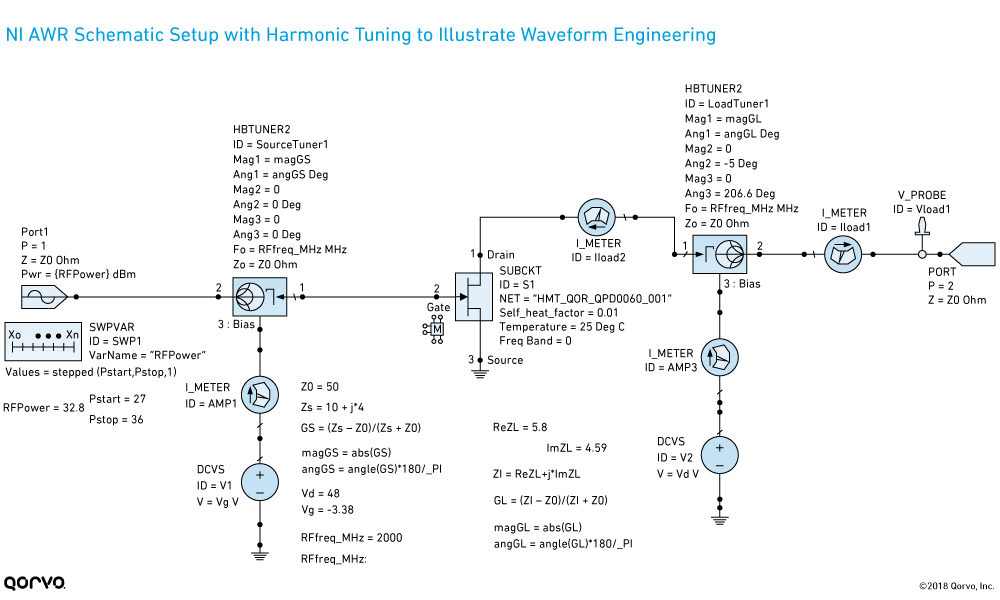 Larry co-founded Modelithics in 2001 to provide improved modeling solutions and high-quality microwave measurement services for RF and microwave designers. He’s also a passionate educator, serving as a professor in University of South Florida’s electrical engineering department since 1990. In his off time, Larry loves barefoot waterskiing and is a member of the Tampa Bay Water Ski Show team.