Do you work with active and passive microelectronic circuitry and design? If so, you’re very familiar with the negative effects that high temperatures can have on these devices. High operating temperatures can cause performance degradation and decreased service life. As such, engineers should constantly consider thermal implications to mitigate potential problems in device designs.

This blog post and our video titled “Understanding GaN Thermal Analysis” provide practical tips about how to properly design using GaN with thermal considerations in mind.

How to Determine GaN Reliability

Semiconductor reliability is partly deduced by estimating the device maximum channel temperature (TCH,MAX) so an estimated lifetime can be determined. These values are gathered by measuring and modeling thermal resistances, power dissipations, and heat transfer. 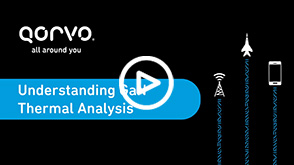 Even though there are limitations with using IR technologies, it remains a popular technique for measuring device temperature. At Qorvo, we take a few more steps beyond IR imaging to accurately determine GaN TCH,MAX. We use 3D thermal modeling, also called finite element analysis (FEA) in conjunction with micro-Raman thermography and then compare those results with RF testing and IR imaging. Using this combined data set, we develop an FEA model for a packaged part providing an accurate value for TCH,MAX.

We encourage you to review the short tutorial video “Understanding GaN Thermal Analysis” as well as the application note GaN Device Channel Temperature, Thermal Resistance and Reliability Estimates for a more detailed explanation on this topic.

Thanks to the authors for this blog and the associated application note: Mark Woods, Matthew Irvine, and Dylan Murdock – all mechanical design engineers at Qorvo. They actively work on GaN technology and bring extensive thermal management knowledge, each from a different perspective: modeling, packaging, and throughput – to name a few. The work they do has a direct impact on Qorvo’s efforts to make GaN’s unique properties more effective in thermal management of device design.