“The internet is not a big truck. It’s a series of tubes.” — Former US Senator Ted Stevens, Alaska

Well, not really. But in the late senator’s defense, the description of the internet as a bunch of finite pathways isn’t wrong and the growing Internet of Things (IoT) is demanding a bigger pipe.

The bigger pipe means more data can travel faster to meet the demand for more capabilities. And when it comes to the increasing amount of data zipping all over the planet these days and taking true advantage of all it has to offer, it’s an image that has the potential for data backups. There is progressively more information coming through that pipe and more and more demand for data every day. Once that data reaches an end user’s doorstep, it needs a more robust and standardized way to get around in the home. In the smart home, that means data moving from your phone to your refrigerator to your TV to your smart speaker and more must be done efficiently. 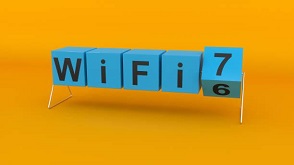 Wi-Fi 6 is currently widely implemented in the market using the 2.4 GHz, 5.2 GHz and 5.6 GHz spectrum bands — or also known as the Wi-Fi tri-band architecture. In some cases, products have already evolved to make use of Wi-Fi 6E, which takes advantage of a new spectrum in the 6 GHz space — that ultimately added an entirely new band of Wi-Fi that had never existed before.

Wi-Fi 6E added yet more spectrum in the 6 GHz band. The next generation, Wi-Fi 7, will bring tangible improvements with higher modulation and 16 x 16 multiple-input multiple-output (MIMO) capability. It will utilize all the Wi-Fi 5, 6 and 6E spectrum band and offer new capabilities like lower latency, higher throughput and higher data rate. Wi-Fi 7 adds additional improvements, bringing more bandwidth and capability to the home’s wireless applications. Moreover, Wi-Fi 7 provides access to a much bigger pipe than today’s consumers are used to.

What Possibilities Can Wi-Fi 7 Enable in the Smart Home?

Increased throughput, lower latency and a function called multilink operation (MLO) mean new data-centric applications in the smart home go to the next level. Consider a virtual reality gaming link. These games require a great deal of data at very low latency to operate. Because when you turn your head, you want to see the video in your headset turning with you in real-time. MLO adds capabilities to the Wi-Fi management system that utilize different radios for a common client. It improves the utility of the connections, capacity management and speed of data transfer, which is the part that helps reduce latency. So, the bottom line is—more data, faster. That freedom allows for developing a market full of creative new products and applications that benefit from higher throughput and lower latency.

The innovative products that will thrive on this expansive Wi-Fi bandwidth have to talk to each other to use their true potential in the smart home. Currently, most homes and infrastructures use a Wi-Fi mesh system. Using the mesh system takes advantage of expanded bandwidth by having dedicated communication links to both gateways and extenders along with the clients tied to them. 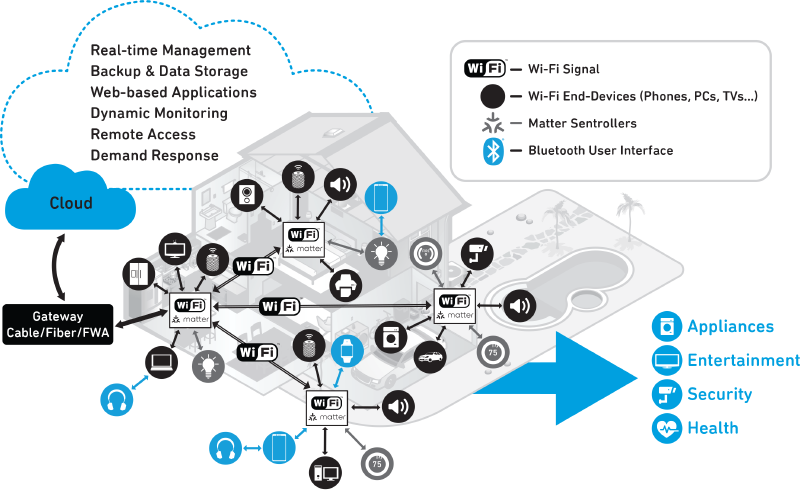 The development of IoT ties in both sensors and periphery devices that run on Wi-Fi—anything from a garage door opener and window blinds to security cameras and so much more. But so many of these IoT devices communicate via their own protocols: Zigbee, Thread and Bluetooth® low energy (LE). Today, various product ecosystems operate as isolated islands, forcing developers to work out integration with each ecosystem interface. That often means developing a single product several times over to meet each protocol language. It also means forcing the end-user to plug in separate gateways for each radio link, leading to multiple meshed systems for the IoT device to operate.

Regardless of which lower-level protocol the IoT devices are running, Matter converges them into a common language. Now, with Matter, if a core gateway device has an embedded Wi-Fi, Thread, or Bluetooth low-energy radio, it can communicate—no matter the protocol and from a single application—with the end nodes in the network. This is significantly different from the current situation, where developers would have to develop an application layer for each protocol individually and add an extra bridging/translation layer to build a unified Smart Home network. What Matter brings is a new IoT protocol—but it’s new in a smart way. It doesn’t reinvent the wheel. It’s taking technology currently available and combining it to create a universal IoT standard.

With Matter, all ecosystem manufacturers can make it easier for product developers to innovate because the interoperability function is taken care of. Instead, they can focus on creativity. At the same time, it also becomes a lot simpler for consumers to choose the products they want. No more asking, “What do I already have in my home? Is it compatible with the gateway I already have? Is it Wi-Fi? Is it Zigbee? Is it Thread?”

The open IoT standards in the marketplace.

Not the Flavor of the Month

The Matter standard is being driven by the Connectivity Standards Alliance (CSA)—made up of representatives from across the industry, including Amazon, Apple, Google and Qorvo. Alliance members are currently working on ensuring interoperability with various devices and ecosystems. The CSA is creating the software specifications that spell out what it means to be Matter certified. And it’s even going a step further. For the first time in an IoT standard, not only is the specification defined but also an open-source implementation is made available, which means that everyone can see and download the source. Every sector can work from the same database and software, which means interoperability is almost guaranteed by design. Qorvo and many other silicon vendors have adopted this reference implementation. Using a shared code base amongst devices from different vendors will further increase interoperability. A common API among Matter silicon vendors will make it easier for product developers to introduce new silicon vendors as a second source, providing a significant benefit in the supply-chain-constrained world we live in today.

The CSA is expected to ratify the standard later this year. Afterward, we might be able to expect an even greater wave of new smart home products that demand even more from Senator Steven’s series of tubes.

The CSA is the foundation and future of the Internet of Things (IoT). Established in 2002, its wide-ranging global membership collaborates to create and evolve universal open standards for the products transforming how we live, work and play. With its members’ deep and diverse expertise, robust certification programs, and a full suite of open IoT solutions—including Matter—they lead the movement toward a more intuitive, imaginative, and useful world.

Tony Testa inspires wireless connectivity product innovations for Qorvo. With his 20-plus years of experience supporting industry alliance activities and customers, he helps engineers create state-of-the-art RF solutions that have a profound impact on our daily life.

Tim and his applications team guide and assist customers from project start to mass production with implementing Qorvo's silicon into their products. He is responsible for our worldwide application software engineering efforts, including customer engineering and integration support, as well as the development of reference software development kits.