Earlier this year, the IEEE Microwave Theory & Techniques Society (MTT-S) gave Qorvo fellow Dr. Michael Roberg the Outstanding Young Engineer award for 2021. This award recognizes Michael’s contributions to the advancement and innovations of microwave engineering and design. Microwave Journal interviewed him after the announcement. You can watch it here.

Those who know and have worked with Michael are not too surprised at the recognition of his achievements. He has brought innovative ideas to Qorvo products for more than ten years through his dedication to advancing MMIC technology in both design and simulation. That dedication comes from a passion in science from a young age. In the sixth grade, he won first prize at the Science Fair with his creation of a running electric motor. When his sixth-grade teacher purchased it from him for $20, he was hooked on engineering products commercially that were both interesting and beneficial.

Michael earned his bachelor's degree from Lewisburg, Pennsylvania's Bucknell College, where he developed his love for microwave engineering. Working for Lockheed Martin, he went on to earn his master's degree in electrical engineering at the University of Pennsylvania. For his Ph.D., he focused on high-efficiency nonlinear transmitters and high-efficiency power amplifier (PA) design, working with Dr. Zoya Popovic at the University of Colorado at Boulder. Michael then joined Qorvo and has been researching and working on decade bandwidth PAs to realize higher efficiency and higher performance using GaN transistors. His work on PAs has culminated in the high-performance GaN solutions such as: 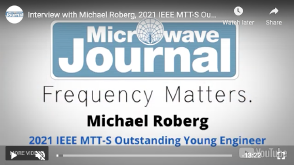 Additionally, his focus has been on K-band communications amplifiers for very wide video bandwidth as well as 5G devices and applications.

Convincing power amplifiers to behave while pushing the envelope on parameters like power and efficiency, and demanding more from their designs, creates interesting challenges for engineers. According to Michael, a huge advance to help solve modern engineering problems has been in the evolution of circuit simulation using device models, such as Qorvo's (available through Modelithics), that engineers can use in circuit simulations.

"We're getting a lot better with the models in both active device models and passive modeling," says Michael. "We're certainly able to do a lot better correlation to measure performance relative to simulated performance than we could ten years ago. I think honestly, we're going through a bit of a renaissance right now with the size of the electromagnetic problems."

Advances in simulation and modeling have evolved as the capacity of computing power available to engineers has grown through ever-larger high-performance computing (HPC) systems—both on-premises and available in the cloud. Electronic Design Automation (EDA) software also continues to advance with more parallelism to take advantage of more compute capacity. Those factors allow engineers to solve problems today that were not possible 20 years ago, or even ten years ago, according to Michael. And better computing and software allows engineers to solve design issues faster.

"You can solve 1000-port simulations right now with some of the large computing power that we have at our fingertips at Qorvo," comments Michael. "And so that really allows you to get that extra performance out of a design and make more challenging designs."

Accurate models and powerful simulation software allow engineers to solve problems during digital prototyping and early digital circuit designs—helping get things right the first time when chip creation occurs. So, when it comes to high-frequency power amplifiers using GaN transistors, it's important that the device model accurately predict the PA transistor's nonlinear behavior. These behaviors include the representation of voltage-dependent current sources, capacitances, diode models, parasitic inductance, and resistance for the overall frequency-dependent behavior of the device. Modelithics performs extensive analysis on Qorvo devices to represent these characteristics accurately.

According to Michael nonlinear models have gotten better over the last ten years. Still, the MMIC industry can expect to see even better nonlinear device modeling, especially when solving certain GaN trapping issues.

Advice from an Award-winning Engineer

Michael’s award comes from a life dedicated to pushing the envelope, looking for creative ways to solve challenging design problems, and not accepting the impossible.

"It's the people that go solve the impossible problems that move things forward," he offers to those entering the field. "So, don't assume something's impossible because somebody hasn't done it. Keep pushing the envelope. Never stop improving, never become complacent."