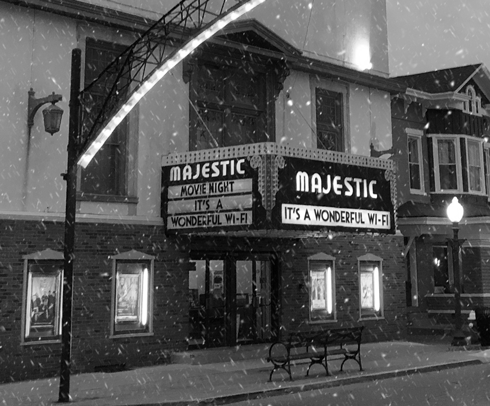 It’s that magical time of year when family and friends gather ‘round a crackling fireplace, the smell of homemade cookies fills the air, and an annual tradition is renewed when Frank Capra’s classic, “It’s a Wonderful Life,” finds its spot at the top of the holiday movie playlist. We’re reminded by the movie’s lead character George Bailey of simpler times, and how each of us is shaped by life’s milestones and unexpected events.

A quick look at competing technologies paints a bleak picture!

Instead of Wi-Fi hotspots, the landscape is dotted now with Bluetooth hotspots. Given Bluetooth’s short range, that’s a lot of hotspots! Within the home, the Bluetooth hotspot is more crowded than the lottery ticket line for Hamilton. And with four people sharing a 1 Megabit pipe, don’t expect to win a round at Fortnite anytime soon.

“It’s a Wonderful Life” buffers at the very prospect.

Had enough family bonding around the Bluetooth hub? It might be time to roll it old school with the trusty Cat 5 cable. Unlike Wi-Fi, where everyone shares the airwaves, the Cat 5 home is cable chaos. With each family member needing a dedicated cable, every room in the house has become a tangled trip hazard. High marks for data rates quickly give way to “Have a nice trip; see you next fall.”

HomePlug to the rescue!

Ah yes, HomePlug. The nascent technology that was going to make Wi-Fi unnecessary because every home and business is already wired for electricity. HomePlug allows devices to communicate with each other, and the internet, over existing electrical wiring. Now instead of tripping over Cat 5 cables, everyone is battling for the closest power outlet to the TV. Never heard of HomePlug or “Powerline Communications?” Don’t worry, you’re not alone. You can still find a few pieces of HomePlug gear on Amazon.

If staying unplugged but connecting with a smartphone is your thing, there’s always the 4G option. Lost and need directions? Just ask Siri. Want to know how many stars Yelp gave the restaurant you just discovered? That was easy. Need to post an update and selfie to Facebook? Done. For most things, 4G works pretty well — at least until you get the dreaded “You’ve reached your data limit” screen. In a world without Wi-Fi, LTE subscriptions have skyrocketed … and so have the data overage and roaming charges. When the $4K/month 4G bill finally arrives, the “Family plan” doesn’t seem like such a great idea after all.

Just as George Bailey realizes how many lives he’s touched, it’s easy to see how Wi-Fi has helped to reshape the world and keep us connected at very high speeds wherever we roam. Wi-Fi continues to see new advances at a similar pace to LTE, and they both continue to complement each other, even as 5G becomes a reality. We’ve come a long way since the first 802.11 PCMCIA cards had to be jammed into our laptops in the 1990s. We’ve seen both range and data rates grow as 802.11 standards have marched through a steady cadence of alphabetical suffixes: a, b, g, n, ac, ad, af, etc.

The latest iteration of Wi-Fi, Wi-Fi 6 (also known as 802.11ax), is helping to improve wireless connectivity in the smart home and the IoT. Wi-Fi 6 promises better coverage in the home, and distributed Wi-Fi that delivers seamless connectivity in every room. No more losing service in the basement or the Front Room Over Garage (FROG)!

Distributed Wi-Fi (or Wi-Fi mesh) will use small satellite routers to share a strong, reliable connection throughout the home, further empowering IoT connections. Now you can use your voice assistant to preheat the oven and record your favorite show — all while wrenching on your car in the garage.

Speaking of cars, Wi-Fi advancements will soon usher in an era of connected cars. With 802.11p, a Wi-Fi standard developed exclusively for vehicles, your car could give you traffic updates in real-time, pay for parking or even drive itself to Gower’s Drugstore in downtown Bedford Falls.

Wi-Fi has been the gift of staying connected with the freedom to move. Just remember, “Every time a Wi-Fi access point gets a ping, a laptop gets its wings.”