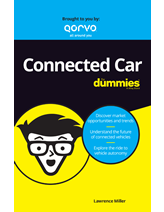 The digital car is no longer a concept of the future. Automotive connectivity — or “connected car” applications — have now reached critical demand. Let’s look at the systems and networks that connect the car to the environment (V2X), the cloud (telematics), and infotainment for passengers and drivers.

This blog is an excerpt from Chapter 2 of our e-book, Connected Car For Dummies®.

V2X: Connecting to the Environment

The connected car, as depicted in the figure below, fits nicely into the developing ecosystem around the IoT. Although we typically think of vehicle-to-vehicle (V2V) connectivity — with lane obstruction or automatic braking alerts, soon the connected car will be a component of a smart city, driven by a multifaceted connected infrastructure and mobile devices. 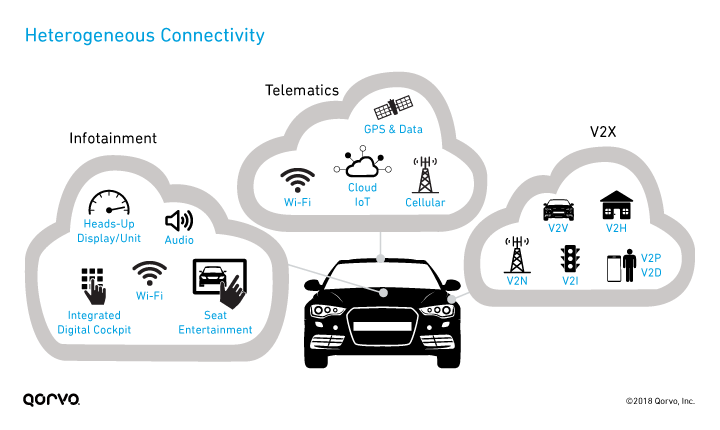 Imagine traffic lights automatically changing based on traffic patterns or responding to commute demands, or your car having the capability to search several city blocks for a parking spot — all enabled by the IoT.

V2X senses the environment to enable next-generation autonomy and real-time monitoring in the connected car. There are currently two key standards for V2X:

Today, IEEE 802.11p–based products are available on the market. Many of today’s vehicles are already equipped with IEEE 802.11p technology. In contrast, C‑V2X is just beginning its entrance into the automotive arena. With today’s cellular eco-system strength, C‑V2X will most likely mature quickly (see the following figure). There may be pros and cons to both technologies, but ultimately it will be a combination of consumer preference and technology that determines how well both technologies succeed in the 5G arena.

See the end of our Connected Car For Dummies e‑book for definitions of key terms and acronyms used in this blog post. 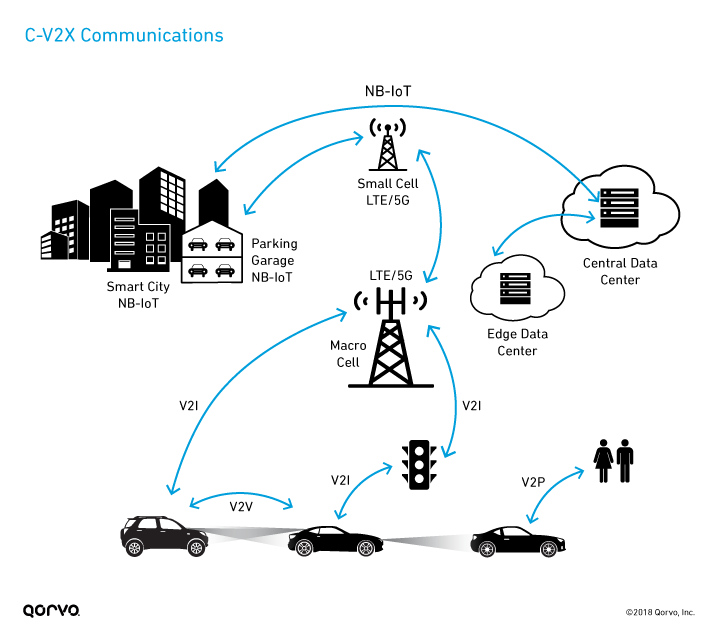 The next table compares DSRC and C‑V2X.

Vehicle safety is a common application for V2X, including:

Finally, V2X is being used to enhance the capabilities in advanced driver assistance systems (ADAS). ADAS typically employ cameras and radar sensors to provide visibility around a vehicle to a range of about 200 meters. V2X applications can share and coordinate information to extend the effective range of ADAS up to several kilometers.

Tip: LiDAR technologies such as onboard safety systems and sensors — for example, lasers, scanners, photodetector receivers, and GPS — also work alongside V2X and will be key enablers of autonomous vehicles.

Telematics: Vehicles Communicating with the Cloud

Telematics provides high-bandwidth connectivity for IoT integration and cloud services. Telematics has been used in commercial vehicles for quite some time to help businesses monitor and optimize various operational factors, such as:

Telematics in the connected car of the future will encompass all cellular standards to deliver 1 gigabit per second (Gbps) capabilities, quickly following leading smartphone capabilities.

Technical Stuff: Gigabit LTE is poised to be included in everything from smartphones and laptops to portable hot spots and vehicles. Gigabit LTE refers to LTE Category 16 (CAT16 LTE) downstream, which was introduced in 3GPP Release 12. Today’s implementations have Gigabit LTE paired with LTE Category 13 uplink for uploads up to 150 Mbps. CAT16 LTE is leading to 5G low latency and higher reliability employing 256 quadrature amplitude modulation (QAM), 3x20 megahertz (MHz) carrier aggregation (CA), and 4x4 multiple input/multiple output (MIMO). QAM, CA, and MIMO are combined in various configurations for each LTE Category, resulting in their rated maximum speeds. The actual rated downlink speed achieved through this combination of technologies is not quite 1 Gbps, but close — 979 megabits per second (Mbps).

The telematics units in the car will be the primary data connection to the car, quickly demanding more data as automobile manufacturers try to match smartphone services. Mobile telecommunications carriers and vehicle OEMs will be motivated to monetize telematics data to the car, which will drive increased complexity in telematics systems. The next figure illustrates a telematics cellular front-end module (FEM). 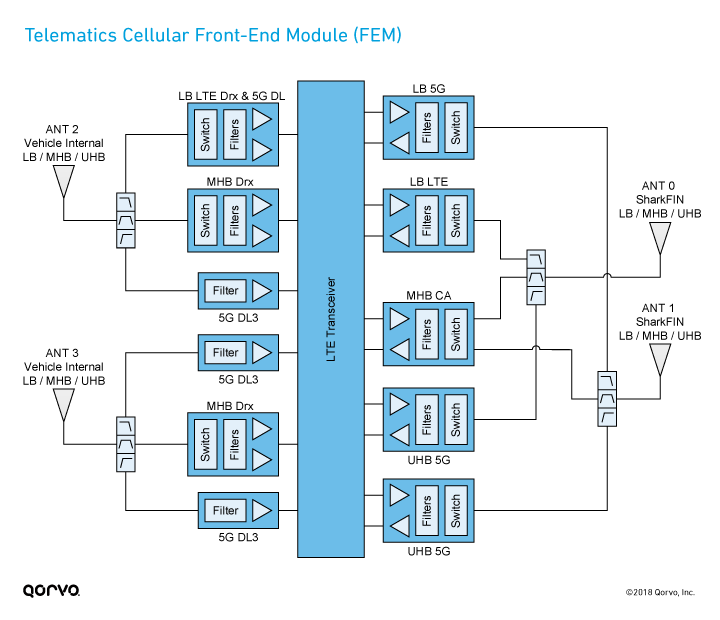 A key advantage of telematics over smartphones is antenna performance. In automobile telematics, the antenna is typically located in the shark fin, outside the car’s metal body. A smartphone located inside a vehicle means the antenna is within the metal body of the car. This degrades antenna performance, unless your dog is using your smartphone, in which case his head is sticking outside the window! Why? Because the vehicle acts like a Faraday cage — a grounded metal screen surrounding a piece of equipment, which excludes electrostatic and electromagnetic influences. To mitigate this Faraday cage effect, vehicle manufacturers are adding all telematics antennas, including cellular, to the shark fin. This allows users to connect their smartphones to the vehicle, thereby eliminating the Faraday cage effect.

Today’s infotainment systems allow passengers to connect outside the car as well as inside the car. Some infotainment applications include entertainment (including high-definition and satellite radio), navigation, search, and more. Key enabling protocols include Wi‑Fi and Bluetooth® technology (see the following figure). 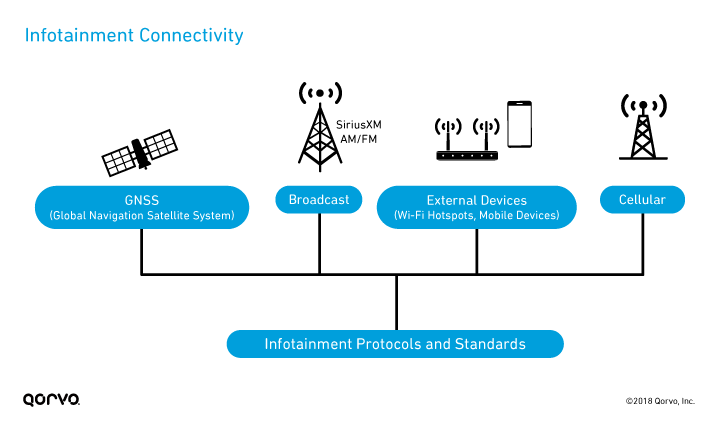 Wi‑Fi hot spots in the car will be the primary connection that will enable a multi-user interface similar to home Wi‑Fi networks today. Wi‑Fi will deliver 1 Gbps data via the telematics unit in connected cars, to be used by all occupants of the car. The heavy use of Wi‑Fi hot spots and new implementations of V2X will also create new safety challenges in the connected car. For example, V2X and 5 GHz Wi‑Fi will have significant spectrum co-existence challenges that will need to be addressed using innovative filter products.

Filter products reduce out-of-band interferences between radio frequency (RF) bands such as cellular, Wi‑Fi, Bluetooth frequencies, and so on. Many of these bands are very close to each other and filtering is required to manage interference between systems. For example, within the 2.4 GHz Wi‑Fi band, there is an increased potential for interference with cellular communications, like band 41 in the 4G LTE band. RF designers use coexistence filters to address the potential for transmitted Wi‑Fi signals to desensitize LTE receiver reception, and for LTE signals to interfere with Wi‑Fi communications. Bulk acoustic wave (BAW) filters are very effective at meeting these requirements.

Tip: To learn more about RF filters, download a free copy of RF Filter Technologies For Dummies and RF Filter Applications For Dummies at www.qorvo.com/design-hub/ebooks/filters-for-dummies.

Filters also aid in providing a safety factor. Proper bandpass filters mitigate interferences between bands such as the cellular LTE band 13 and the public safety band used by the United States public safety services. Without these filters, safety services could be interrupted.

As more vehicle and network services are added, design challenges will follow. The vehicle is becoming crammed with many RF signals, increased data processing, and more functionality. Negotiating the intricate balance between each of these within the vehicle are discussed further in Chapter 4 of Connected Car For Dummies.

Want to learn more about the connected car of the future? Download your free copy of Qorvo’s Connected Car For Dummies e-book.

– Excerpted with permission from John Wiley & Sons, Inc., from Connected Car For Dummies.