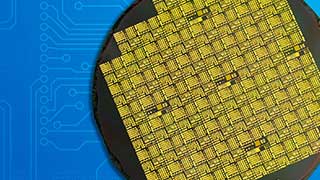 CES 2018 did not disappoint, with a gaggle of networking-enabled gadgets for your home, car and bathroom. But many of these technologies demand more data, putting strain on wireless networks.

Imagine if all 125 million U.S. households suddenly invested in a smart toilet?

When the number of low- and high-bandwidth devices multiply, cable TV networks and cellular base stations bear the burden. So, what’s a network provider to do?

The answer — somewhat surprisingly — is to borrow from the defense industry. When times get tough in the commercial electronics space, network providers seek to adopt high-gain, high-power RF solutions from defense radar and communications systems, including many that depend on gallium nitride.

Gallium nitride, more affectionately known as “GaN,” is not the latest cryptocurrency or something you likely learned about in high school chemistry class. GaN is a compound semiconductor that comes in many flavors depending on the application. These include:

No matter the flavor, GaN means power. GaN operates reliably at higher temperatures and over longer lifetimes, making it perfect for aerospace and defense applications in harsh environments. For example, since the 1990s, GaN has been used in space applications, communications systems and active electronically scanned array (AESA) radar.

Yet another acronym for your growing repertoire.

Today, plastic packaging has made GaN more affordable and attractive for commercial markets. Plastic allows for a lighter product and design flexibility, which are both important for commercial applications. Wireless infrastructure providers can also use GaN in plastic packaging to upgrade existing systems, saving time and money for upgrades, without having to create entirely new devices.

Beyond power savings, GaN supports other green initiatives by greatly reducing material waste and the energy needed to produce line amplifiers made from Gallium Arsenide (GaAs) or silicon. Because of GaN’s inherently rugged thermal properties, it is well suited for next generation networks where long-term reliability is a critical factor.

All of this means lower operating costs for network providers, and more reliable, less expensive wireless services for consumers.

While still in its infancy in networking, GaN has already made a significant impact. In cable TV, GaN has enabled the rollout of DOCSIS 3.1, a CATV standard that allows cable providers to improve network speeds using existing cable infrastructure.

When your favorite Stranger Things characters are fighting off monsters in high-definition, thank DOCSIS 3.1 (and GaN).

GaN is also having an impact on cellular base stations that carry signals from towers to your phone. Bandwidth is a finite resource. So, as data demands increase, network operators must boost the performance of their base stations, while managing excess heat. GaN is up to the challenge, with superior thermal properties to keep base stations cool.

The advent of 5G makes GaN all the more important. High-power, high-frequency and heat management are the big three in making the fifth-generation cellular network a reality.

It’s only a matter of time before GaN finds its way into handsets, as well. Smartphone manufacturers will need GaN to reach higher, millimeter wave (mmWave) frequencies required for 5G.

The challenge is operating GaN at lower voltage levels. Typical operating voltages for radar, base stations and cable TV applications range between 28 and 48 volts. In handheld devices, the average range is 2.7 to 5 volts. We are already working on new process technology and packing techniques to allow GaN to operate at these low voltages.

Ultimately, when we get to mmWave, GaN will have a clear advantage over today’s technologies in power size and efficiency. Expect to see mmWave in mobile devices in the early-to-mid 2020s.